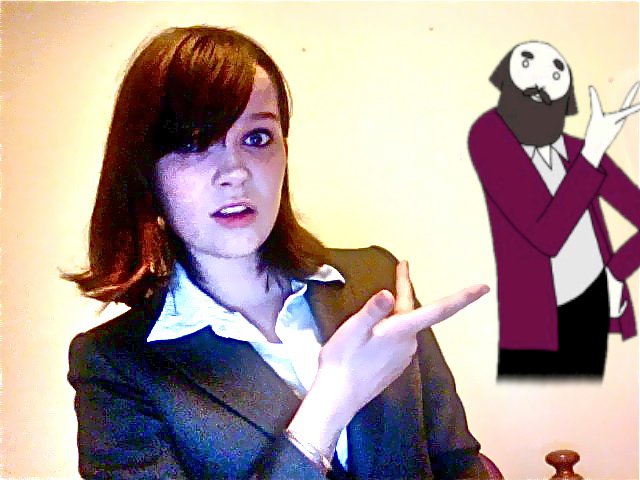 Who is Linguist and Comic Illustrator R. E. Parrish, Story of Convergence of Mediums and Niche Jokes

Transmedium News is always on the lookout for artists and creators who explore more than one medium. Get to know Robin and her very funny comics that you may not always understand but will at the least provoke you to read an author or two.

You can find her at reparrishcomics.com and take a look at some more funny comics, follow her on Twitter or just be nice and buy her a cup of coffee.

Hello, Robin can you tell us about yourself in few words?

My name is Robin, I’m originally from Virginia, and initially my career ambition was being an academic, but since that didn’t work out I guess cartooning isn’t so bad.

Can you go into how you started doing illustrations, in high school or university?

I always loved drawing, although I have never really had any formal art training (which may be obvious). The first time I ever drew a real, published comic was for my undergraduate university’s Russian language newspaper (The William and Mary Gazeta). I drew cartoons about Russian literature, which I published in both English and Russian. Sadly this meant it was pretty hard for me to do pun- or language-based jokes since generally if it worked in English it wouldn’t work in Russian, and vice-versa.

Most of your work is tightly linked to famous authors and classical pieces of work. How does the creative process look like in your case?

Literature has always been pretty much my foremost passion since I was a little kid, and I have always been very interested in the public personalities of famous writers. While some of my comics are about the content / fictional characters from certain novels, my favorite jokes to make are about the authors themselves. I like to watch or read their interviews or biographies to come up with joke ideas.

What was the first one you did and which is your favourite?

The first comic I ever wrote for the internet/public was my Benjamin Franklin comic (it does contain a swear word, just as a warning), and my favorite comic is probably the one about the artist who wants to adapt David Foster Wallace’s “Infinite Jest” into a sports anime, since that is a complete self-insert and I genuinely think an animated television series would be the best (honestly, only) way to adapt that behemoth. Plus I spent an embarrassing amount of time in college unironically drawing Hal Incandenza as a moody anime boy.

Who inspires you and by that I mean illustration artists and painters and other figures linked to the medium of illustration and comic strip genre?

My favorite comedic comics / cartoons are pretty much all web-based – my four favorites are easily Achewood by Chris Onstad, The Anime Club / Gunshow by KC Green, Will Laren’s single panel comics, and anything Brad Neely  has ever made (whose character Professor Frank I have deeply identified with for years and is featured in the artist photo of this article). For longer-form and more serious stuff I am really into Nick Drnaso, Jillian Tamaki, and Sam Alden.

As a linguist could you provide your personal opinion on the future of the mediums you use to work and create?

Hm, that’s difficult. I will say I’ve actually always been partial to really, almost absurdly, wordy comics and jokes, which definitely shows in what I produce (which some people consider a weakness). Maybe this is due to my years as a linguistics student, but I think there’s nothing funnier than a really good turn of phrase. This definitely does not jive with what mainstream gag strips have historically been, but there’s an audience for it I guess. What else? Obviously having an active online presence (or “Brand”, lol) has become basically mandatory for cartoonists, so I guess I was lucky that I’ve been glued to the computer for my whole life, since I never had to transition from having been established as a print-only cartoonist like some of the older / more veteran cartoonists I follow.

How did traveling and experiencing different cultures influenced you in your approach to creating and having fun with what you are doing?

I found that in both Bulgaria and Japan (the only two countries I have lived in for a significant amount of time), it was always especially cool and interesting to observe the differences in the types of humor that are embraced by the culture, and how it compares to the types of humor generally embraced by American culture. Is the humor darker? Are puns popular? Sarcasm? What does satire or political humor look like in the country? I also liked to observe, when showing my students humorous content from America, which jokes “worked” cross-culturally or cross-linguistically, and which jokes didn’t.

I want to start doing longer form comics, either for established anthologies or self-published. I’m taking a couple of art and writing classes right now to try to learn some of the basic skills that I’d need for that, so hopefully I can produce something before too long.