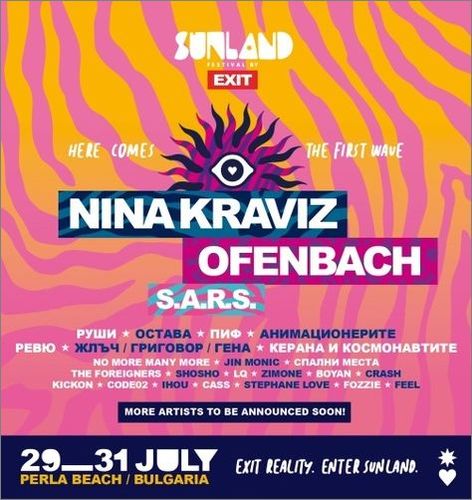 What Do we Know so far About the New Sunland Music Festival in Primorsko?

Nina Kraviz, Ofenbach and S.A.R.S. are the announced so far leading foreign performers of the first edition of the music festival Sunland, which will be held from 29 to 31 July in Primorsko. The event was announced as part of 20 years of experience at one of the world’s best music festivals, Exit in Novi Sad, Serbia.

The audience is looking forward to the next announced names.

The festival area will be on Perla beach, north of Primorsko. The beach is named after the nearby former residence of the socialist government.

The organizers specify that the camping area of ​​Sunland will have showers, toilets, emergency lighting and separate places for charging electricity. Dangerous objects (tools, cutting tools and the like) will not be allowed in the area. Lighting a fire will be strictly forbidden throughout the festival area. There will be no restrictions on the type of tent and the number of people in it, as long as the tents are tourist. Tents with heavy constructions will not be allowed. The area will be fenced and the guards will monitor the order and comfort of visitors, without responsibility for personal belongings. There will be a secure container for personal belongings in the festival area.