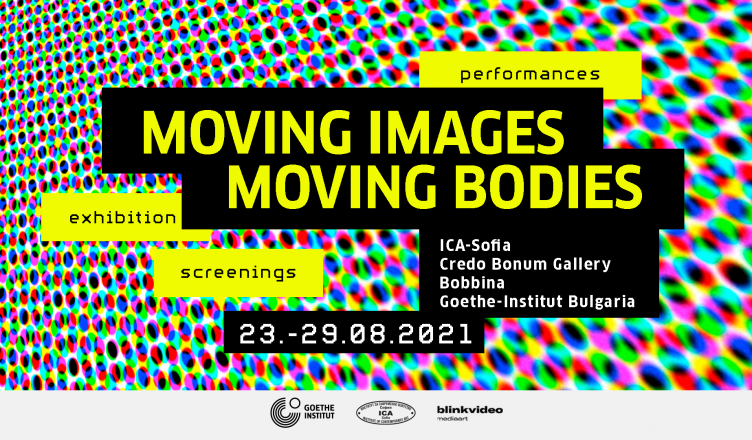 Week of Contemporary Video Art from Bulgaria and Germany

In the last week of August, three locations in Sofia hosted a group exhibition, united under the theme Moving Images, Moving Bodies, in which some of the current names of the Bulgarian and German cultural scene, working with video: Boryana Petkova, Dimitar Solakov, Evamaria Shaler, Kamen Stoyanov, Kirstin Burkhard, Mina Minov, Nadezhda Oleg-Lyahova, Sevda Semer, Stella Hepert and Teboho Edkins. Performances and talks with the artists will be held at each of the locations. The exhibition is part of the project of the same name, focused on current video art from Germany and Bulgaria. The program also includes performances, screenings and meetings with participants, focusing on the topic of the human body, related to the study of interpersonal relationships.

The tour begins on August 23 at 6 pm with an opening in the independent space “Bobbina” (with works by: Nadezhda Oleg-Lyahova, Teboho Edkins and Kamen Stoyanov), continues through the gallery “Credo Bonum” (here the works are by: Kirstin Burkhard, Evamaria Schaler and Dimitar Solakov) and takes visitors to ISI – Sofia (there we will see the works of: Stella Hepert, Boryana Petkova and Mina Minov), where in addition to an exhibition, after 20.30 video artist Stella Hepert (Berlin) will present the video InsideT ( collective) and the solo performance InsideT – Learning from the Body, dedicated to the transforming qualities of the body and the intergenerational archives that it preserves.

In the following evenings, the Goethe-Institut will make several more suggestions for a pleasant time with screenings of art films from Bulgaria, united in the program “Shooting Ghosts” and presented by its curators Kalin Serapionov and Krassimir Terziev. Especially for connoisseurs of video art, the program focuses on the conversation with the German collector Mario von Kelterborn about video art in Germany, its distribution and collecting. Selected works from Kelterborn’s international video art collection will also be on display during the event.

The program continues with a performance by video artist Evamaria Schaller (Germany), in which traditionally daily actions take on new forms, becoming interactions. The joint performance “Pan (dem) ic attack” by Kirstin Burkhardt (Germany) and Sevda Semer (Bulgaria) will meet for the first time live the two artists to give a clear look to their previous experience.

Moving Images, Moving Bodies ends again on August 28 in “Bobbina Space”, where the audience will have the opportunity to engage in a conversation with director Teboho Edkins (South Africa / Berlin). Teboho Edkins filmed in criminal circles in Cape Town, in a prison with cattle thieves in Lesotho or in African communities in China. In this context, excerpts from his films will be shown, which have something to report on these topics. Another focus of the discussion will be how Edkins’ documentary and artistic approach takes him more and more from the film scene to the art scene.