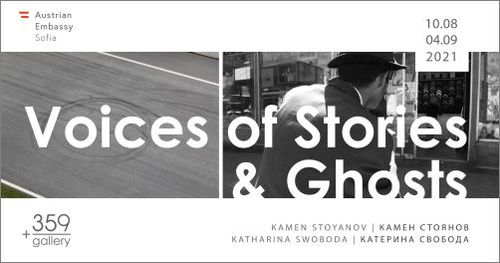 In her text “Magic and Politics: Conspirituality and COVID-19”, Giovanna Parmigiani distinguishes conspiratorial faith from belief in conspiracies and argues that conspiratorial faith can be understood as an artistic and aesthetic practice. She writes about a new community that seeks not only visibility, but wants to be fully accepted, recognized and legitimized in its “participatory” or “magical” way of living in our modern world.

“Intentionally or not, the project” Voices of Stories and Ghosts “by Katarina Svoboda and Kamen Stoyanov appears at the right time – to formulate aesthetically such a magical and seemingly somewhat irrational understanding of the present. To a large extent, it is based on works that play with beliefs, personal rituals and mythologies that can easily be seen today in the context of the beliefs of the post-Covid-19-post-New Age era.

And yet, the works come from different and very real facts, circumstances, personalities, social or historical processes. Videos and photographs placed in the context of the Water Tower space become even more unusual, not to mention the symbolic meaning of the “tower” in Western cultural symbolism. Such a “pretentious” space, with all the freedom it gives to the imagination and the cultural memory of the viewer enter into a direct dialogue with the works of the two artists. These works definitely require active intellectual interaction. This is because all the films are based on incredible facts, interpreted through an original narrative and cinematic solution. Their perception requires the audience to be prepared in advance and to engage in a casual dialogue.

Whether we meet the unpredictable spirit of Manuel Alvarez Bravo on the streets of Mexico City (“Phantom” by Kamen Stoyanov), or we fall into the story of Lela Lombardi (interpreted by Katarina Svoboda in her installation “Lela”). Whether we are impressed by the modernism of the pool designed by Lyubetkin and at the same time look for the missing penguins in the emptiness of this pool (“Penguin Pool” by Svoboda) or find ourselves in a seemingly absurdly empty and empty hotel on the Black Sea coast, where we become part of a surreal act...READ MORE HERE