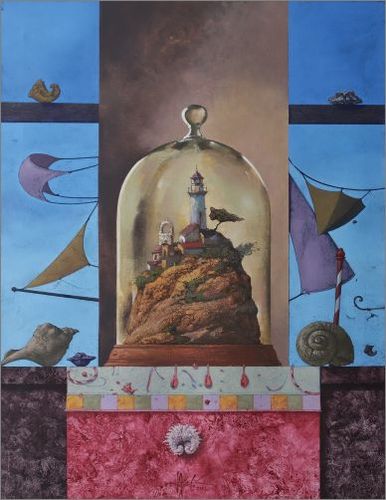 Rakursi Gallery presents the exhibition “Travels in absentia” by Valentin Angelov, about which he says with his inherent humor and ease:

“I have been dreaming of long-distance sailing for a long time. Or at least for a boat trip. Yes, but I don’t have a boat. No rowing. Not to mention the sea. A sea requires tests, vaccines, quarantines… It’s complicated.

However, the artist has the privilege of having his own world to travel to when he pleases. A boat palette, two rowing brushes and a few paints for the road, and if you don’t know, a white canvas is many times bigger than the White Sea.

Yes, yes. I got ready and set off on a journey, hidden in the warmth of the studio. The plan was to finish everything in a month or two, but things dragged on. Sometimes I stagnated on a shore, other times there was no headwind and imperceptibly the months became a year.

I do not regret it. I visited exotic countries, discovered an island, wandered on deserted beaches, collected wonderful flowers, listened to legends of bygone times. I was traveling. Of course, there were some difficult moments. Sometimes I felt lonely. Other times the brush dried or the white paint was almost over, but I kept telling myself that when it was all over, I would go outside, put on my favorite mask, and show my friends the pictures from that trip.

I am waiting for you at the exhibition!

P.P. When drawing these pictures, the three Ds are observed: Distance. Discipline. Disinfection. “

Valentin Angelov was born in 1961 in Sofia. He graduated in “Graphics” at the National Academy of Arts. He has over forty solo exhibitions in Sofia, Varna, Cologne, Budapest, Moscow, Vienna, Prague, Istanbul, Mykonos, Luxembourg. He won an award at the Biennial of Drawing in El Ferrol, Spain.

Works in the field of painting, graphics, illustration, comics, caricature, advertising. One of the artists of “Rainbow” magazine.