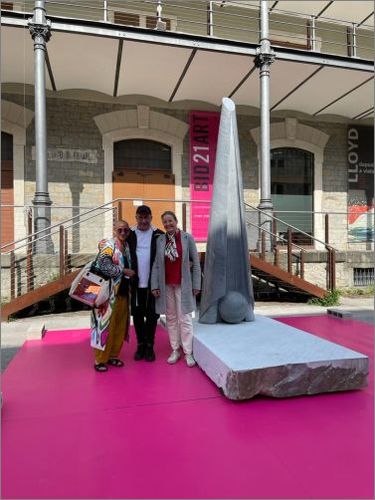 The city of Trieste, Italy, is once again hosting the third edition of the La Donna International Biennale Festival (BID21), which aims to promote women’s art on the world art scene.

The forum is held from May 16 to July 18, 2021 (http://www.bid.trieste.it/) and three provocative Bulgarian women artists participate in the net – Yves Toshain, Veronika Mihaleva, Mirjana Todorova. What unites them, in addition to their exceptional talent, is their art dealer – international curator and critic of contemporary art – Stefan Stoyanov. He also represented three other world-renowned names in the contemporary art world at the biennial – the only Muslim woman invited to an exhibition at the Vatican – the infamous Aidan Salahova, the abstract sculptor Gabriela von Habsburg, the BID21 curator and the critic Ivana Ivkovic.

This year, BID21 focuses on the theme of “Silent Transformations” as interpreted by the philosopher Francois Julien, who in “Les transformations silencieuses” (2009) emphasizes the phenomenon of the slow and imperceptible transformation of reality that occurs before our eyes. The exhibition aims to present the expressiveness of women artists to transform these changes into a universal language, captured from an intimate and emotional, symbolic, relational or ecological point of view, through the various artistic techniques of painting, sculpture, applied arts, photography, video and digital arts, installations and performance art.

Aidan Salahova, the Azerbaijani artist with whom the international curator Stefan Stoyanov has been working for years and has exclusive rights to sell her art, is one of the few women artists invited to be a special guest at this year’s biennial (http://www.aidans.ru /). Aidan Salakhova participates with a large sculpture “Obelisque”. Aidan Salakhova has had an extremely strong influence on the development of contemporary art in Russia. In her works Salakhova explores the themes of gender, women’s sexuality in the context of Islam, the contrast between East and West, issues Undoubtedly one of the most important woman artist in Russia – her works send a clear message: women must realize and accept their desires and assert their right to fulfill them.

The Austrian artist Yves Toshain (https://www.toshain.com/), born in Bulgaria, is known to the Bulgarian public for the provocation she made on the facade of a gallery in Sofia last October. Yves then showed three monumental guillotine flags – to Austria, Bulgaria and the United Europe in response to her interpretation of the Covid crisis and the imposed isolation. Eve is the only artist to participate in the Trieste Biennale with a video performance. The video “Opposition” focuses on military parades and despite the latitude and nationality from which each originates, they are based on the general idea of ​​passionate and hypnotic propaganda of war, veiled behind beautiful clothes and people with rhythmic abstract-mechanical movements. This hyperrealism brings military parades closer to pop culture than to the real meaning they carry. The artistic abstraction is achieved by creating visual rhymes between the action and the silhouettes, and for this purpose the video shows a North Korean military parade.

Gabriela von Habsburg is the curator of BID21ART and is an internationally renowned abstract sculptor who works mainly with stainless steel as well as stone-printed lithography. Extremely provocative, she has already been invited to make her solo exhibition in Bulgaria in the summer, where she will exhibit her latest works.

Veronika Mihaleva (@vmnotsafe) is the youngest participant in BID21, in which she shows a portrait of her sister called “Reflections”, created in 2015 with acrylic paints. Her art comforts the restless and disturbs the calm. The “Reflections” portrait marks the moment when Veronica begins to look for what is hidden under the mask, to wander in the middle, between life and death, and life on the edge. She often unfolds the topics ousted from society, which in themselves remain unaccepted, and her works encourage the viewer to sink into thought.

Mirjana Todorova is a visual artist who lives and works between New York and Sofia (http://miryanatodorova.com/#palaceoutofsheds). Her preferred means of expression are painting, performance and video. An important part of her work are public interventions. It examines issues related to the politics of public space and its way of living. At BID21 she participates with an installation that provokes the imagination and is inspired by women’s everyday life – shopping, housekeeping, walking…