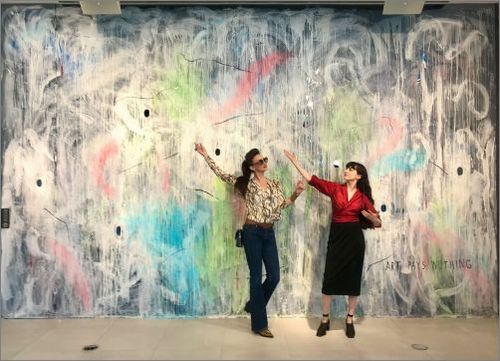 The space for contemporary art UniCredit Studio opened its doors for the exhibition A Good Deal and was filled with a lot of talent, creativity and youth.

For several days, visual experimenter Maria Nalbantova transformed UniCredit Studio using the “soap painting” technique, resulting in a temporary site-specific installation, A Good Deal, or art created for a specific place that lives only within the specific territory. Outside of it – it is unthinkable.

The exhibition was opened by the actress and producer Desi Tenekedjieva, in her role of Chairman of the Stoyan Kambarev Foundation and Boris Genov – Retail Banking Director of UniCredit Bulbank, who shared:

We met Maria Nalbantova at the prestigious Stoyan Kambarev Art Flight Award ceremony in 2020, where she won the Special Award of the Foundation and UniCredit Bulbank, namely the realization of a solo exhibition in our space for contemporary art and publishing a catalog. Now, a year later, Maria is ready with her art installation. This is basically a mirror wall, but now you see it completely transformed, covered with melted soap and acquired a completely different look. One of the things that impressed us the most was that the work was designed specifically for our space. Can you hear the sound from the ATMs in the next room? Even they have enriched the original idea… “

“Maria Nalbantova is an exceptional visual artist. Each of her exhibitions has a specific mission and tells a story. Now she is focusing on the artist’s place in the market economy. And what does “Good Deal” mean in the context of contemporary art? Why did Maria choose soap as an artistic tool during a pandemic, in which it was raised on a pedestal? And the small mirror gaps in which we see our own image? The sound of banknotes withdrawn from ATMs in the room connected to the gallery also becomes a natural sound environment of the art installation. Money has never been a major goal for any true artist, but it is a necessity we cannot do without. Even just to create. That is why the Stoyan Kambarev Foundation will buy part of this site-specific installation (although it cannot be owned physically), in order to support Maria Nalbantova again and this will be a really A Good Deal for her. “

The exhibition can be viewed until August 6 at UniCredit Studio, which is located at 7 St. Nedelya Square in the capital. The space for contemporary art aims to provide a platform for the performance of young talented artists. It was established by UniCredit Bulbank in 2012 and already has a history of over 50 exhibitions, partnering extremely successfully with the Stoyan Kambarev Foundation and each year presenting some of the young artists and visual artists, members of the Kambarev Academy, nominated for the elite award. for Flight in Art.

The extravagant artist Maria Nalbantova is one of them and is among the brightest young Bulgarian contemporary artists. It is distinguished by its specific and original artistic look and the bold combination of different media such as graphic design, illustration, art and alternative publications, object books, textiles, embroidery, collage installations, documentary materials and archives.

She graduated with bachelor’s and master’s degrees from the National Academy of Arts. He studied under the Erasmus program at the Faculty of Fine Arts at the Universidad de Granada, Granada, Spain, where he participated in several exhibitions. Winner of an award for a bachelor’s degree project at the National Academy of Arts with her author’s picture book “Book for”. In 2018, her solo exhibition “Weather Forecast” will take place at the Vaska Emanouilova Gallery. He is the author of the illustrations for Valeri Petrov’s “Button for Sleep” by Kolibri Publishing House, which is part of a series of four books with fairy tales and won the National Hristo G. Danov Award 2019 in the Art of the Book category. In 2019 he became a finalist of the scholarship “With efforts to the stars”, Cultural Perspectives Foundation. In 2020 Maria Nalbantova was nominated for the most prestigious award for young artists in Bulgaria – the Stoyan Kambarev Flight in Art Award. In the same year she became the winner of the BASE Award for Contemporary Art – an indisputable recognition of her remarkable talent.

You can see how the site-specific art installation was created: https://www.youtube.com/watch?v=D7nGAcgn4ZM