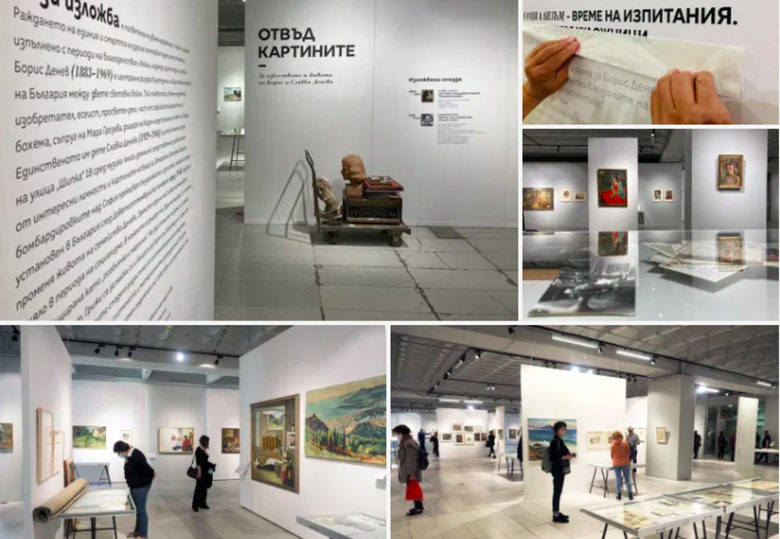 The Visible character. Exhibition About Boris and Slavka Denevi at UBA

The text was originally published on Toest.

The exhibition “Beyond the Paintings. About the Art and Life of Boris and Slavka Denevi” can be seen until June 22 in Hall 1A of the Sofia Gallery “Shipka 6” of the Union of Bulgarian Artists.

In general, I avoid writing about exhibitions because it’s the work of art critics, and I’m a philologist. However, I experienced the exhibition about Boris and Slavka Denevi at the Union of Bulgarian Artists as literature. That’s why I dare to tell about it. “Beyond the Paintings” is the work of Anton Staykov and Svoboda Tsekova – and is extraordinary not only with the exhibited works, but as a story, as a reader’s experience.

Behind it, the communication in absentia with the two characters is very strong – professionally, but not only. Like good literature, it makes you see the character as a living person who affects you emotionally, enters your comfort zone, and draws the curtains to see the world beyond.

The light in the exhibition is natural. Many of the windows are left open: a seemingly inconspicuous choice that sets the style of the story – not the theatricality of the closed room with artificial lighting, but the light on which most of the paintings are painted. The greenery of Shipka Street, the same one where the artists lived, invades through the open windows. Next to one of the windows there is a sign with text – a memory from their neighbor how they moved, how they paid for two paintings for one seal. But I’m in a hurry.

The first important decision is where to start. Anton Staykov and Svoboda Tsekova started with the aircraft that Boris Denev persistently tried to invent. They leave it like this – as the first marker of the character, the first impression at a meeting. And they begin to lead you forward.

The second visible choice is not to put explanatory notes under each picture. The notes are available if you want – you receive them in paper form. Above all, however, they confront the images themselves, they trust your eye, your taste, what you will see or will not see in them. The research work is done, visibly in-depth, but the researcher is not following you to teach you how to look. The reader in me thanks.

The explanatory texts are of two types: “world events”, generally speaking – huge white panels with black letters that descend from the ceiling to the floor and literally force you to step into another space. The same coercion they put on the characters. The second texts are small plates that stand on the wide archive drawers with personal photos, drawings, letters, stories, sketches, newspaper clippings. Here is the character, the way in which a father and daughter do not give in to the story, try to change its story or at least prevent it from changing theirs.

The photo in which Boris Denev painted the dead horses from the Balkan War. A newspaper clipping with the method by which he taught drawing (let the children express themselves by drawing, you would not stop them from talking because they are too young to formulate a grammatically correct sentence); testimony of a fashion designer about Boris Denev’s clothes (I remember some gaiters, as well as the general impression of self-esteem), the bohemian, merry artistry (for the first puppet show, that of “The Beetles”, I knew, but the story of the Istanbul couch was new to me, too such as the “story in pictures” discovered by Anton Staykov personally, in other words – a program for the visit of a Greek delegation at the invitation of the Bulgarian-Greek society), the pile of photos of little Slavka, the friendship with Vera Mutafchieva, the secret phone conversations with Dora Gabe patiently listens to children’s poems, the tent in the yard, the home theater. You linger more in front of this picture of childhood, it makes you dream, not Astrid Lindgren and Tuve Jansson, it was meters from where you stand.

And you step beyond the Ninth. Even after Boris’s return from the camp (Slavka painted his father immediately afterwards), a more literal meaning of “narrowing the horizons” is hard to find. The artist is forbidden to paint outside the house at all. Nor in the park. Nor in the city. Nor in the mountains. Still lifes and family portraits. Painted on both sides of the canvas (Anton and Svoboda decide to show us the “reverse” side).

Slavka was the first to be admitted to the Academy, but she was not allowed to graduate. Her later custom is to leave many paintings unfinished – or maybe not, maybe that’s how she wants to show them. The rural plots, the filigree bowl of corn noise, the full wrists of the woman who plays solitaire. The scene cut out of the picture with bathing people splice in their foreground. Anton and Svoboda present both the final picture and the clipping, and you see the literal, physical, decisive cutting. By the way, the picture is a response to a drawing of her father – the men bathing in prison.

The personal library, arranged with the covers up, should not just say that Slavka Deneva is a scholar (translates Dickinson!), But invite you to see specifically, ask you which of these you read, what you see in the pictures, make you you feel in front of a friend’s library. Next to one of the books, “The Things” by Georges Perek – a plaque with a reference to the tapestry created by Slavka, owned by the National Gallery.

And finally, despite the persecution and harassment, the generous gesture to leave everything to the UBA – and his paintings, and those of his father, and the family home (unconditionally, only to allow the lodger to live without money for the rest of his life). Visible huge legacy – both of the father, one of the great names in Bulgarian art history, and his own, systemic, not ordained by the conjuncture of time – a priceless legacy for which the favored institution did not care enough. To this day.

This exhibition is a rehabilitation gesture – not because it rehabilitates Boris and Slavka Denevi, but because it tries to restore justice, honesty in the face of artistic heritage, to restore the hope that good weather will weed it out.

The exhibition of Anton Staykov and Svoboda Tsekova tells a story – but also corrects the story. Decent work, go see it.