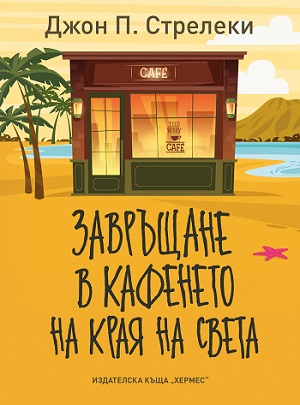 The sequel to the best-selling book “Cafe at the End of the World” by John P. Streleki was released on June 8. Along with names like Oprah Winfrey, Tony Robbins and Deepak Chopra, Streleki is considered one of the 100 most influential people in the field of leadership and personal development. The short inspiring story from “Cafe at the End of the World” has been translated into more than 35 languages ​​and has topped the charts on three continents for over 156 weeks.

In “Return to the Cafe at the End of the World”, Streleki continues to ask provocative questions to help us achieve harmony with ourselves and take a new approach to life.

John’s life and outlook change dramatically when one night he gets lost and accidentally finds himself in a roadside cafe with the strange name Why You’re Here. Exciting conversations and insights inspire him to give up the depressing routine of everyday life and take a new approach to life.

Ten years later, John is riding a bicycle on a scenic Hawaiian route when, to his great astonishment, he sees the cafe by the deserted road. There are also his old acquaintances – the waitress Casey and the owner Mike. However, they will be joined by a new visitor – the workaholic Jessica, who has lost the way and mobile connection of her phone. She reluctantly agrees to stay for a while in the cafe, where she receives the traditional menu with three questions on the back.

Already undergoing a spiritual transformation, John will in turn try to help Jessica achieve harmony with herself. However, he does not suspect that exciting challenges await him, which will lead him in a new direction.

John P. Streleki defines himself as an expert in helping people live life to the fullest. After abandoning his settled but monotonous daily life and traveling around the world with a backpack for a year, he wrote Cafe at the End of the World. The short inspirational story has been translated into more than 35 languages ​​and has topped the charts on three continents over 156 weeks. John P. Streleki is the author of several other titles, with a total circulation of more than 3 million copies.

Through his books and appearances on television and radio, John Streleki has been able to convey his messages to millions of people, inspiring them to make their own decisions about their lives. Along with names like Oprah Winfrey, Tony Robbins and Deepak Chopra, he is considered one of the 100 most influential people in the field of leadership and personal development.

Newer PostSofia Art Projects Started with an International Exhibition in Largo
Older Post The New Sunland Festival, Part of Exit, with its First Edition in Bulgaria in July