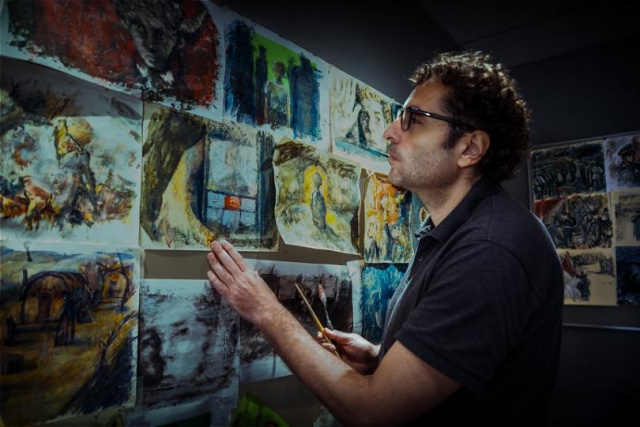 The Physics of Sorrow by Theodor Ushev Receives First Award

“I am happy to announce that the Physics of Sorrow has won the Special Jury Award at the Toronto Festival! It is not often a short animated film to win a major festival award in competition with feature films and documentaries! Let’s just say – almost never … Good start! “Ushev wrote on Facebook.

The new animated film by Canada-based filmmaker and artist based on the eponymous novel by Georgi Gospodinov made its world premiere in Toronto, one of the most prestigious film festivals, in the presence of actor Rossif Sutherland, who, along with his father, Donald Sutherland, voiced the English version.

The most ambitious project so far of Ushev – the Canadian-French production of the National Film Board of Canada and the television channel for culture and art “Arte”, attracted the attention of specialists even before its premiere with the unusual drawing technique used by the artist – encaustic.

“I was overwhelmed by the images,” says Rossif Sutherland to the Montreal Gazette at the beginning of the festival, “but also by the poetry in the text. I’ve never done anything like this before. The filmmakers had a very specific idea of ​​what tone they wanted me to have. Sometimes it seemed like I wasn’t doing enough. Now that I see the movie, I can understand. The images are so powerful and the music so emotional … I’m proud to be a part of it. “

In 2017, Ushev’s previous film, Blind Vaysha, was nominated for an Academy Award in the Best Short Film category. The premiere of Toronto Physics of Sadness marks the beginning of an Oscar-winning campaign for his new production, the Montreal Gazette notes.

The other awards of the festival, in which the audience is also involved, were announced on September 15th. “Jojo Rabbit”, the strange story of a German boy from the time of the Third Reich, starring Scarlett Johansson, was named best in the feature film category. The film is directed by New Zealander Taika Waititi (Thor: Ragnarok). Noah Baumbach’s drama “The Wedding Story” was ranked second, with Scarlett Johansson (again) and Adam Driver.

The first place among the documentaries was the American-Armenian production “I Am Not Alone”, directed by Garin Hovhannisyan with the participation of Serj Tankian as a music author and producer. The film talks about Armenian politician and current Prime Minister Nikol Pashinyan and his role in the 2018 Armenian Revolution.

The Best Canadian Feature Film Award was also won by a story about a politician. “The Twentieth Century” is a dramedy, directed by Matthew Rankin, which presents a highly stylized and thoughtful portrait of the rise to power of former Canadian Prime Minister William Lyon Mackenzie King in the 1920s.

In the category of “Physics of Sorrow” – for Canada’s best short film – the award went to Chloé Robichaud’s “Delphine” – a drama about a young Lebanese-born Canadian harassed in high school because of her different ethnicity, who finds an unexpected friend and protector.

Newer PostKinomania 33½ Opens with Twisted World, a Marius Kurkinsky Film
Older Post Check Out Some of the Bulgarian Film Released in the Autumn of 2019