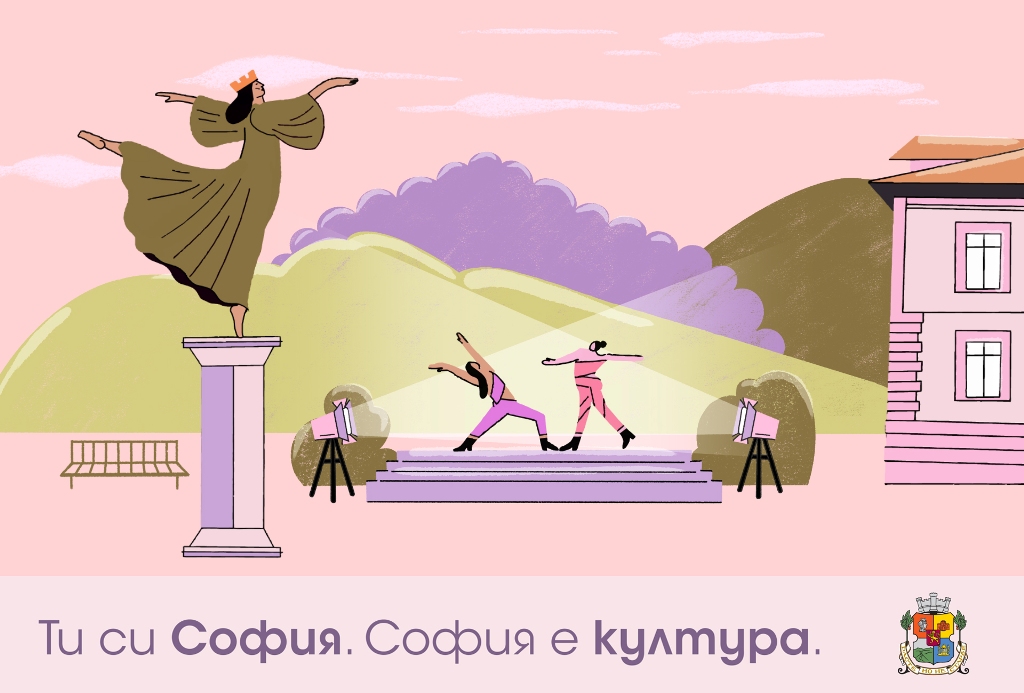 Every year the Sofia Municipality organizes in the summer months a rich program with cultural events on open stages. This year the events for children and adults start on May 16 and will continue up until  June, July, August and September, as well as on the warm days of October. 218 events – theater performances, concerts, film screenings, workshops, programs for children, will be financially and logistically supported by Sofia Municipality through the Calendar of Cultural Events – section “Summer Program”.

On May 16 (Sunday) from 11.00 on the stage of the cinema “Kabana” will be presented the first puppet musical performance for children from the project “Born under a lucky star” of the Foundation for Culture and Art “Spaces”. Admission is free. The project is created based on texts by Finnish writer Tove Janson, dramatized and directed by actress Margarita Petrova, the characters and their magical world were created by set designer Zdravka Kantareva, and the songs and music are by Milena Velikova and Siana Atanasova. Kabana Cinema is the next meeting with the three strange friends and adventurers from the show, the children will see them on July 3, 10 and 31 from 11.00 am on Slaveykov Square.

“Balloon Dreams” is an event for children, youth and parents of the “JAR Theater-Art-Culture” Foundation. Five 90-minute interactive artistic actions in the open air present practices from the field of contemporary visual and performing arts: immersive installation, balloon sculpture, walk-about animation, puppet-theater performance, workshop for making balloon figures – airigami, dance fiesta. They will take place on the stage of the Kabana cinema from 11.00 am on May 23, June 2 and 15, August 1 and 28 with free admission.

“Mice go to the opera” is an interactive performance for children from the cycle “Divertimento” – a musical dramatization of the eponymous poem for children by the poet Maria Doneva. Performers are the trio “Divertimento”: Graciela Panayotova – violin, Sofia Radilova – cello, Mladen Taskov – piano and singers Milena Gyurova and Stefan Petkov. The director of the program is Rositsa Kostova. Maria Doneva is a screenwriter and presenter. The author of the arrangements of the selected musical fragments is Mladen Taskov. The performances are in the Kabana cinema on June 13 from 11.00 and on September 25 from 11.00. Admission is free.

“Summer with puppet tales” is a project for the youngest audience with the participation of three theatrical formations – Chameleon Theater, Alex Puppet Formation and Marietta and Marionette Theater House. The fabulous meetings with the favorite characters from “Leche-Buboleche”, “The Wonderful House” and “Grandpa takes out a turnip” are in the cinema “Kabana” with free entrance on May 22 and 31 from 11.00, as well as in the gallery “Serdika” of the Women’s market – on June 19 and August 28.

Six mono-performances of six actors, enclosed in 1 square meter of personal space, beyond which the meeting with the spectator takes place, are offered by the project “Exhibits” of the Studio for Documentary Theater “Vox Populli”. The performances will be performed on June 12 and 13 at 8 pm in the Crystal Garden and on June 19 and 20 in the garden behind the National Art Gallery – Palace.

The performance “Lights and Talents”, dedicated to the 30th anniversary of the vocal quartet “Nightingale” will be presented on June 20 at 18.00 on the Summer Variety in Borisova Garden. The ensemble for folk songs and dances “Slavey”, the young laureates from the National competition “Chicken sings” and from the online competition “Lights and talents” `2021 will also take part in the program.

A week of the musical theater “Under the Stars” will present “New Theater – National Palace of Culture”. From July 12 to 18, the project builds a bridge between theater and music. The program also includes a musical and poetic performance dedicated to the covenants of Levski.

“Jazz evenings in the summer garden” will present two concerts on the stage of the cinema “Kabana” – on August 1 and 15 from 19.00. Admission is free. On August 1, the musicians from the “Martin Markov Trio” – Martin Markov (piano), Mikhail Ivanov (double bass) and Atanas Popov (drums) will appear on the stage. The trio was formed in 2011 with the idea to play only original music. On August 15, “Teodor Petkov Trio” – Teodor Petkov – Toto (piano), Vasil Hadzhigrudev (double bass) and Borislav Petrov (drums). The characteristic musical style of the trio is the classical jazz sound from the middle of the last century, presented in a modern way by world-class musicians.

The theater project “Atman – and now where” of “Atelier Plastelin” will use the techniques of improvisation, community theater and theater with masks to present a unique product to the audience – in the cinema “Kabana” on September 1 and September 8 from 11.00. with free entrance.

The Balkan Documentary Center Association will present the Sofia Documentary Summer Cinema. From September 7 to 14, the format will be a guest at the “Thermal Power Plant Fest” in South Park – Part II with screenings of the latest documentaries. Debates related to them will also be organized, with a focus on the most pressing human rights issues.

More information about the events of the Summer Program of Sofia Municipality will be published on the cultural site “ArtSofia” (http://artsofia.bg/bg).

Newer PostThe Harlequin Festival with a Jubilee Edition and New Categories
Older Post Film About Bulgarian Climber Boyan Petrov with a Big Award from the Festival in Trento, Italy