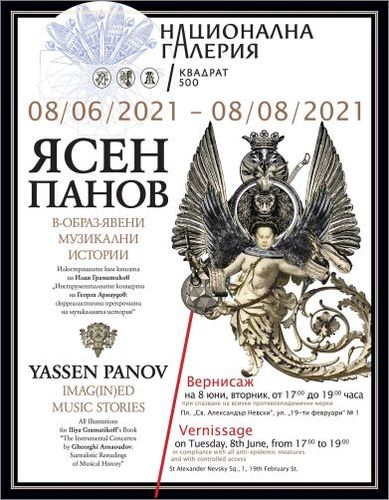 in compliance with all anti-epidemic measures and controlled access

The exhibition presents over 250 works from the latest graphic work of Yasen Panov. All of them are illustrations (dividing pages, capital letters and numbers, vignettes and other decorative elements, portraits of famous composers and prominent historical figures), created in the period February – June 2020 for the luxurious first edition of the new musicological research of Iliya Gramatikov – “Georgi Arnaudov’s Instrumental Concerts: Surreal Rereadings of Musical History” (Institute for the Study of Arts – BAS, 2020).

The illustrations are digital collages, integrating original drawings and various other graphic material from different historical epochs and styles, thus creating an entirely new and emphatically phantasmagoric visual narrative, wandering as if beyond the course of time and at the same time seemingly wandering among layers of history.

Although conceived as astonishing figurative accompaniment of musicological as a genre and musical as a structure and verbal expression, Panov’s collages go beyond the usual decorative function of illustration, because they are placed in a situation of constructive creative dialogue with Gramatikov’s text. They sometimes interpret the ideas presented in it through pictorial means, sometimes they add new layers of meaning through intertextual connections encoded in the graphic elements, sometimes they express in image the spirit of Arnaudov’s music analyzed in the research.

Such semantic and artistic interaction is possible due to the similar creative approach in Arnaudov’s compositions and Panov’s collages. In the book Gramatikov describes one of its key characteristics – the tireless re-reading with rethinking and upgrading of expression from different historical epochs in order to metamorphose it into a homogeneous, rich in allusions to the past, but emphatically modern and original creative language. This is the language in which the two authors will imagine the story in order to be able to recreate it creatively in the form of unprecedented musical and visual artistic narratives.

The exhibition shows the result of a long research and creative project, linking the searches of three authors from different fields of art and science – authors demonstrating a bright and recognizable individual style. This is an ambitious project, the realization of which not only shows crossing the boundaries between the various arts, but also demonstrates the successful establishment of direct links between the extremely encapsulated in modern spheres of creativity and science. The result of this project is an interdisciplinary book edition with multiple status. On the one hand, it offers experimental as a structure and non-standard as realization scientific text – musicological research, built in musical form through verbal analogues of compositional techniques, in which the author, without betraying the strict scientific discourse, writes in the widest possible humanitarian horizon and seeks additional semantic support in the various arts. On the other hand, the edition is an album with numerous graphic works, offering both an image of the ideas developed in the text and an interpretation in the stroke and color of the music that provoked the research. And some of this music, in turn, was written after inspiration from earlier graphic works by the artist (designer and illustrator) of the book.

In the context of modern book publishing, whose policy is determined mainly by commercial interests and economic considerations, the publication of a scientific text as an artistic product – a richly illustrated luxury book – seems like an extreme extravagance bordering on an end in itself. But the book is not the fruit of such an intention at all, but is the result of the bold opposition to the stagnant creative imagination and extremely demotivating socio-cultural situation today. Due to the eccentricity of the idea of ​​such a book in the modern context, its creators find inspiration and motivation in the old richly illustrated encyclopedic editions of previous centuries, considered indisputable masterpieces of graphic art, today become bibliographic and artistic values. The leading goal of the authors is the creation of an unprecedented in modern science and art publication, which has no analogue in Bulgaria and around the world.

The current exhibition unleashes the potential of the project through the possibility for the illustrations to be perceived as completely independent works of art, forming new semantic connections with each other when placed in a different spatial context – that of the exhibition hall. Accompanied by recordings of some of the compositions of Georgi Arnaudov, selected as the main objects of study in the text of Iliya Gramatikov, the exhibited illustrations by Yasen Panov are redistributed thematically and printed as 135 circulated graphic works, narrating and imagining real and imaginary musical history.