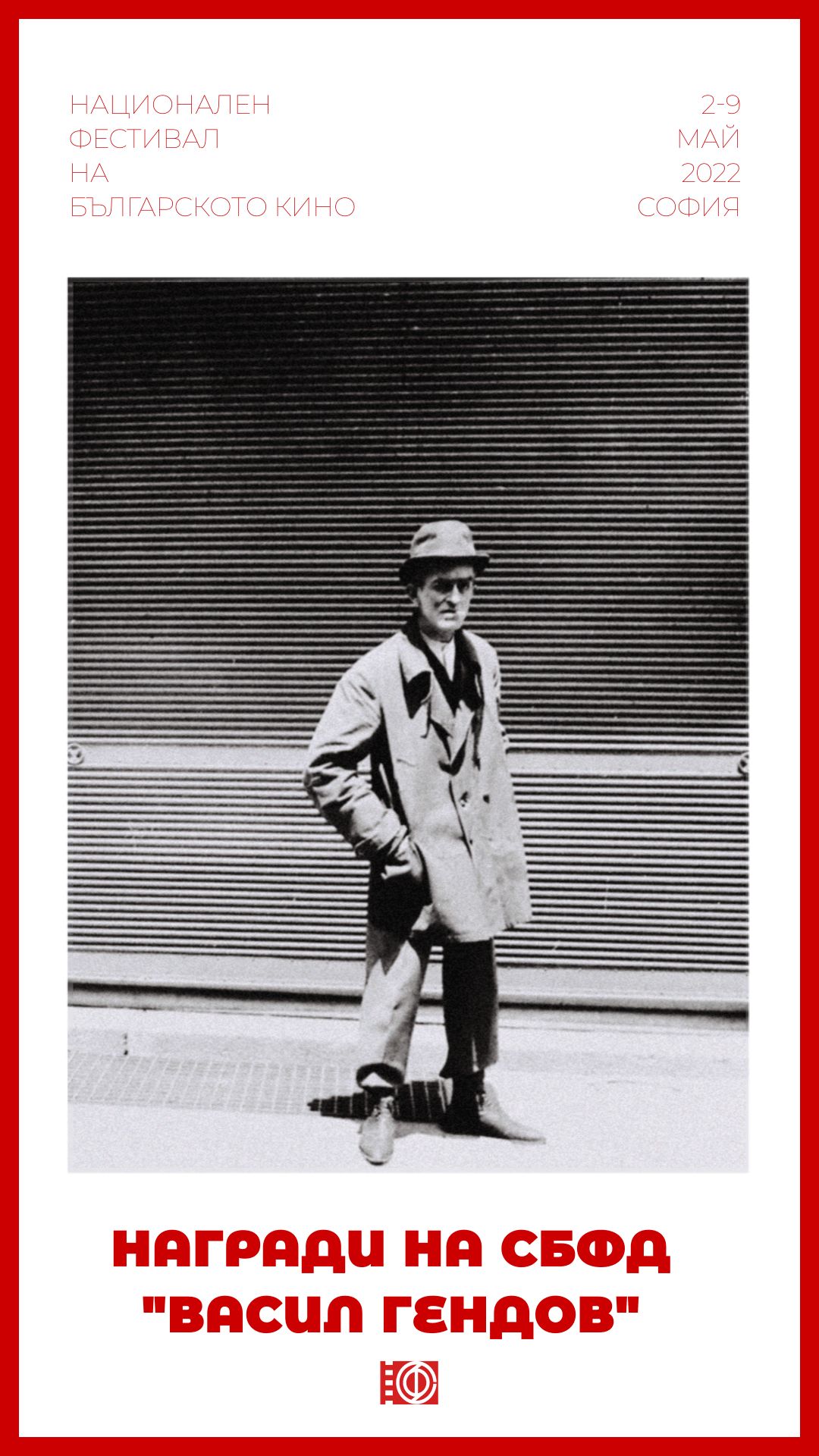 The National Festival of Bulgarian Cinema – SBFD Awards “Vasil Gendov” aims to continue and develop the tradition of the annual awards for film art of the Union of Bulgarian Filmmakers (UBFD), which began in 1975. Over the years, the SBFD awards for national film art have been presented in different formats, but always in accordance with the principles of competitive competition and high professional and artistic criteria.
From 1975 to 1989, the SBFD awards were determined by the SBFD Board of Directors. From 1993 to 1998, the annual awards were determined by a vote of all SBFD members. In 2003, significant changes were made to the SBFD awards regulations, forming two sections. The first section comprises the awards for feature, documentary, popular science and animation, and the second section comprises the awards by profession. In 2006, the SBFD conducted the competitive procedure for the annual film awards in partnership with the NFC. In 2009 and 2010, the awards were again presented jointly with the NFC Agency under the name of the SBFD and NFC Agency Bulgarian Film Art Awards. In order to continue the important cultural tradition of the Union of Bulgarian Filmmakers since 1975 of awarding annual prizes for outstanding achievements in the art of filmmaking, the Union of Bulgarian Filmmakers registered the patent mark “Bulgarian Film Academy” (BFA), in line with the national film academies in the European Union. The Bulgarian Film Academy has been held annually from 2010 to 2017, bringing together the entire cinematographic community. The BFA is the legal owner of the Bulgarian Film Academy brand and directly or through Spectrum 92 (its subsidiary) is the organiser of the awards. The sections in which awards are given are defined by professions corresponding to the professional guilds of the SBFD. Over the years, Spectrum 92 has built up a very good partnership and interaction with the SBFD and, with the active assistance of the SBFD, organises and prepares the entire nomination, determination and award process. This is how the successful campaigns for the annual BFA Film Awards in 2014, 2015, 2016 and 2017 were realized. The official award ceremony became a celebration of Bulgarian cinema. The Bulgarian National Television has been a long-standing media partner of the BFA Awards. In all these years, the NFC has made a significant contribution to the funding of the event.

Spectrum 92 in partnership with the Union of Bulgarian Filmmakers will restore the tradition and organize the annual professional film awards as the National Festival of Bulgarian Cinema – SBFD Awards “Vasil Gendov”, which will be held annually in May in Sofia. The festival will play a significant role in the cultural life of the country, contributing to the promotion of high art cinema, to the outreach of the best Bulgarian films to the audience and to the fair awarding of the highest achievements of filmmakers in the respective widely represented specific professional categories, which are not covered in any other festival in Bulgaria.

The modern and meaningfully expanded festival format will help to make the achievements of filmmakers and film professionals more visible to the general public through its free screenings at the Cinema House.

The National Festival of Bulgarian Cinema – Vasil Gendov Awards will establish itself as a unique and important for the Bulgarian film industry multi-component professional event, which on the one hand aims to promote the achievements of Bulgarian cinema among the general public and attract new audiences for Bulgarian cinema, and on the other hand to stimulate the work of filmmakers by protecting high professional criteria and creating conditions for enhancing their professional competencies.

The competition programme includes a selection of only Bulgarian films, divided into sections for feature films (shorts and features in all genres), documentaries and animation. The competition programme of the Festival will present films by young authors (first and second films) and will award prizes for debut in each of the three main sections – feature, documentary and animation. Only Bulgarian films with a national or world premiere up to 18 months prior to the official opening date of the Festival will be included in the selection. The period of 18 months has been set in view of the fact that the COVID-19 pandemic had an extremely adverse impact on the film industry and reflected heavily on Bulgarian film production.

Once the situation has returned to normal, Bulgarian films with a national or world premiere up to 12 months before the official opening date of the Festival will be eligible for selection for the Festival. 100% European (Bulgarian) films are included in the festival’s competition programme. Some of the films will be screened before their national premiere in Bulgaria or before their official distribution on screens in the country, making the festival an exclusive film event and giving the audience a unique opportunity to see these films first and completely free of charge.

The official prizes will be awarded during the festival’s competition programme by independent juries in the following categories:

● Best Actress in a Leading Role

● for Best Cinematography of a Documentary

The authors and teams of the films participating in the competition programme will be committed to presenting their films to the public at the official screenings in the programme, as well as at special press conferences to which selected media with access to the festival programme through an accreditation system will be invited. During the Festival, the presence of some of the most prominent Bulgarian artists will be ensured, who will present their films and take part in the professional meetings, Q&A, specialized discussions and round tables included in the Festival’s accompanying program.