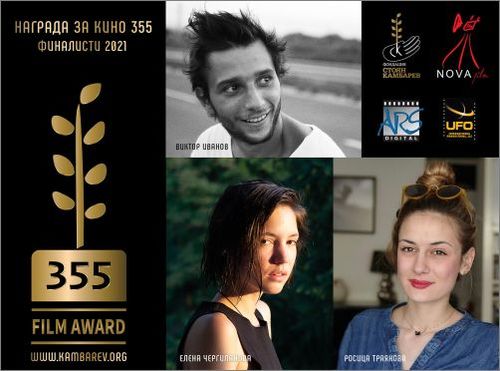 The 13-member international star jury selected the three finalists in this year’s competition of the Stoyan Kambarev Foundation for young filmmakers CINEMA AWARD 355.

Viktor Ivanov with a project for the film To Die 10 Times, Elena Chergilanova with a project for the film How To Lose 10 Kg For One Day and Rositsa Trayanova with a project for the film 10 Eggs continue in the final stage of the competition. Of the nominations received, ten young directors attracted the most attention, but the selected finalists with their synopses and ideas for their implementation, were highly motivated and passionate about cinema according to the jury chaired by the legendary Osvaldo de Santis (33 years president of Twenty Century Fox-Italy), Honorary Chairman our great film director Prof. Georgi Dyulgerov and members from Hollywood, England, Italy and Bulgaria – all remarkable producers, screenwriters and directors.

For the third year in a row, the Stoyan Kambarev Foundation challenged young filmmakers with CINEMA AWARD 355. They had 45 days to submit their applications in a special form on the Foundation’s website – kambarev.com. And now the 3 selected filmmakers have to shoot, edit and broadcast a 5-minute feature film in just 5 days. It was a condition that the number “10” be present in the title of the project, which would be woven into the plot, with complete freedom of theme, style and genre.

Here is more about the selected finalists for 2021, and what they have in common besides the gift, courage and non-traditional approach is that all three have studied and specialized in cinema abroad, but now they have returned to Bulgaria and are shooting their new films here:

Victor is 29 years old, born in Kyustendil. Growing up with Anime, he later fell in love with cinema and especially with the French new wave, which built his style to a great extent. He graduated in cinema and television at NBU, after which he specialized in Italy at the Cinemadamare cinema campus. He continues to shoot in France, Croatia, Italy, Serbia. He has made a dozen short films, including “Neno Who Killed His Father”, “Seconda Categoria”, “Vuja De” and “Locus Amoenus”, which won the Privet Screening at the Biennale Di Venezia 75 and the Umbria Region Award. He has directed many music videos and is currently working on his debut feature film.

Rositsa is 27 years old, born in Balchik. In 2019 he graduated in film directing in Paris. She has directed four short films, including “Call Me What You Want” on the LGBTQ theme, nominated for Best Drama at the Canada Shorts Festival, and “Flowers of the Algerian,” which starred in CineLibri 2019 and won Best Award. adaptation of Moscow Shorts. Her latest film, Pardon, won the Golden Fox for Best Film at the Calcutta International Film Festival, and her first, I Love You, Dad, has been selected at more than 30 international festivals, including the Short Film Corner in Cannes. Rositsa worked in the editorial office of Channel Plus in Paris. She has recently been living in Sofia. In addition to cinema, she enjoys writing poetry under the pseudonym Rose Trajan. In 2012, her debut novel, Chimera for Life, was published.

Elena is only 22 years old. After graduating from the American College in Sofia, she went to England to study Cinema at the University of Reading, but in 2017 she moved to Berlin, where she continued her film adventure with an intensive course in “Experimental Cinema” at Met Film School. Followed by “Graphic Design” at the Berliner Technische Kunsthochschule. During her studies there she created the short experimental film “Toccata”, which was to be distributed in the form of a video installation in galleries. Last year, she shot The Main Course in an abandoned factory and former military base, criticizing the meat industry and specialism. Elena is strongly influenced by surrealism and boldly experiments with the visualization of her films.

Three young filmmakers, but only one winner! Who will he be? The only and decisive role will be played by the audience during the 12th Ceremony for awarding the annual art prizes of the Stoyan Kambarev Foundation, which will take place on April 22, 2021 at JOY Station. The guests will watch the premiere of the three films, will vote live and will determine the third winner of the CINEMA AWARD 355. They will receive the beautiful author’s statuette of Denitsa Boeva ​​and BGN 10,000 in the form of funds and services for the production of their next film from the Foundation and its partners – Nova Film, UFO Film and Television Studios and ARS Digital Studio.

The Stoyan Kambarev Foundation is also proud to inform that the premieres of the two extremely curious films of the Winners of the 355 CINEMA AWARD from the past 2 years are ready and coming soon. They were realized thanks to the Foundation and produced by Desi Tenekedzhieva, namely: “Beyond the Concrete” by Yordan Mihaylovski and “Natasha’s Dream” by Vanya Boycheva.

More details about the award can be found here: http://kambarev.com/bg/355