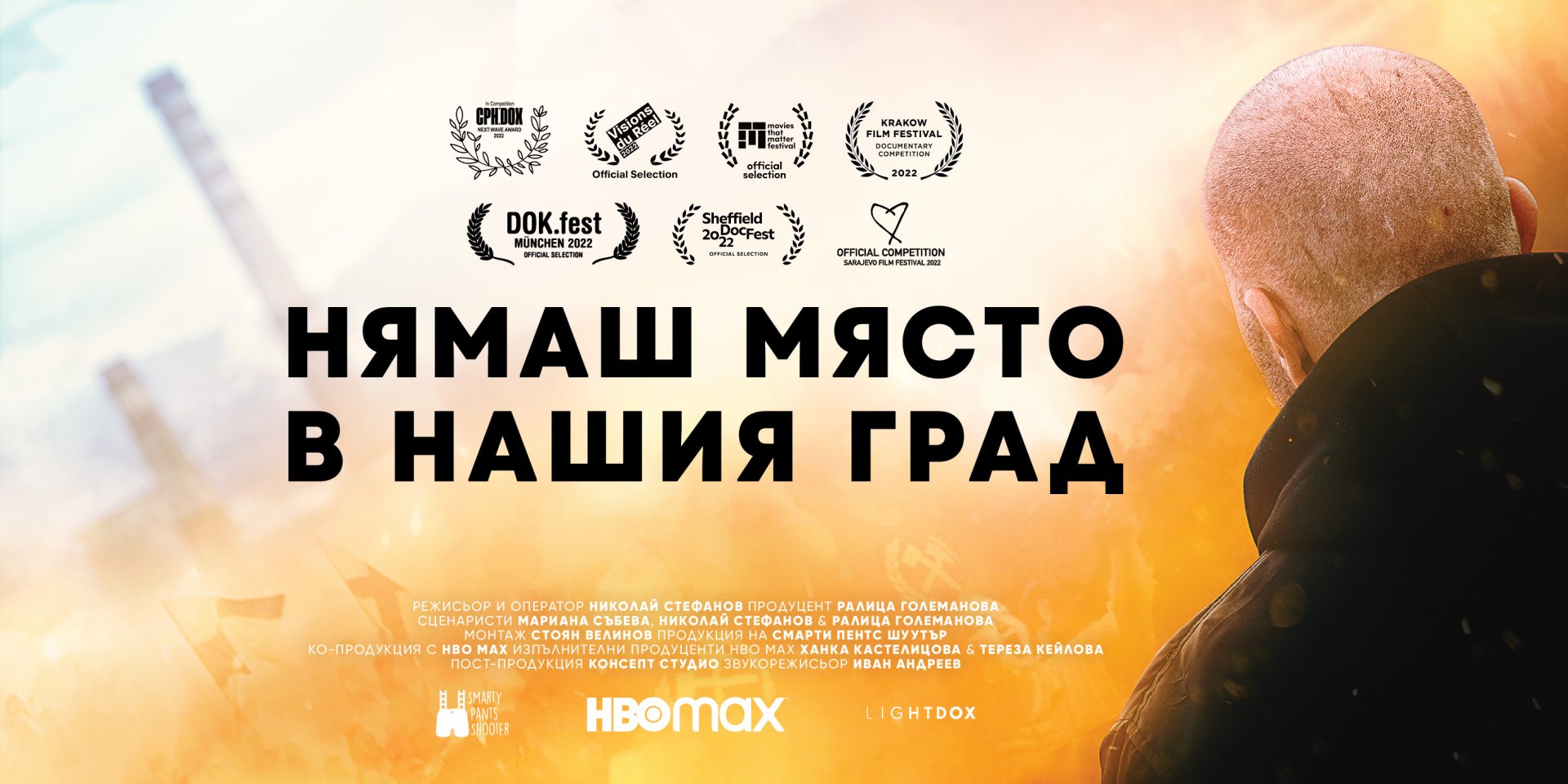 HBO Max and Bulgarian production company Smarty Pants Shooter today released the official trailer and poster of the documentary “You Have No Place in Our City” directed by Nikolay Stefanov and produced by Ralitsa Golemanova. The film will have its streaming premiere on 6 October in over 20 territories in Europe, before being presented for the first time on home soil.

The trailer and poster convey the dynamics and emotionality of the film and the contrasts of the environment in which the characters live, which Nikolay Stefanov’s camera follows with curiosity.

Team, disorder, trust, family… are the words that stand out in the trailer and they set the direction, but far from everything to expect from this 81-minute narrative set in the director’s hometown – Pernik. In addition to a thrilling story, the observational film also provides food for thought on a host of social and historical themes without giving quick answers – leaving viewers to reach their own conclusions.

Following its outstanding selections at some of the best international festivals across Europe, You Have No Place in Our City will have its festival appearance on home soil as the Bulgarian premiere and one of the highlights of the Sofia DocumentaMental Festival.

The official first screening in the festival programme is planned for 20 September under the dome of Largo Sofia at 20:00, where Hanka Kastelitsova, Executive Producer on the HBO Mach side, and the entire film team will be present.

The second screening within the festival is on 26 September at Lumiere Lidl cinema, again at 20:00, and it will be followed by a meet-and-greet with the filmmakers. A limited number of tickets are available for both screenings.

“You Have No Place in Our Town” will also have a nationwide theatrical release, with a theatrical release date of September 23. The appearance of a Bulgarian documentary on the big screen is rather rare and a statement about the film’s potential to attract a wide audience.

“Smarty Pants Shooter’s You Have No Place in Our Town is HBO’s fourth documentary co-production from Bulgaria and the first under the HBO Max streaming brand. The story from the former mining town of Pernik, told through the daily lives of a group of football fans, will be available to watch on Warner Bros.’ streaming platform. Discovery from 6 October in over 20 territories, including Bulgaria, Spain, Portugal, Poland, Hungary, Czech Republic, Romania, Serbia, Montenegro, North Macedonia, Slovenia, Croatia, Bosnia and Herzegovina, Slovakia, Norway, Sweden, Finland, Denmark, Iceland, Estonia, Latvia and Lithuania.

“You Have No Place in Our City is a production of the Bulgarian company Smarty Pants Shooter in co-production with HBO Max. It is directed and cinematographed by Nikolay Stefanov and produced by Ralitsa Golemanova. Executive producers on the HBO Max side are Hanka Kastelitsova and Teresa Keilova. The editing of the film is done by Stoyan Velinov.

Sound engineer is Ivan Andreev for SONUS Studio. Screenwriters are Mariana Sabeva, Nikolay Stefanov and Ralitsa Golemanova. Post-production – Concept Studio. The film will be available in all HBO territories in Europe (over 20), and the distributor for the remaining territories is Lightdox.