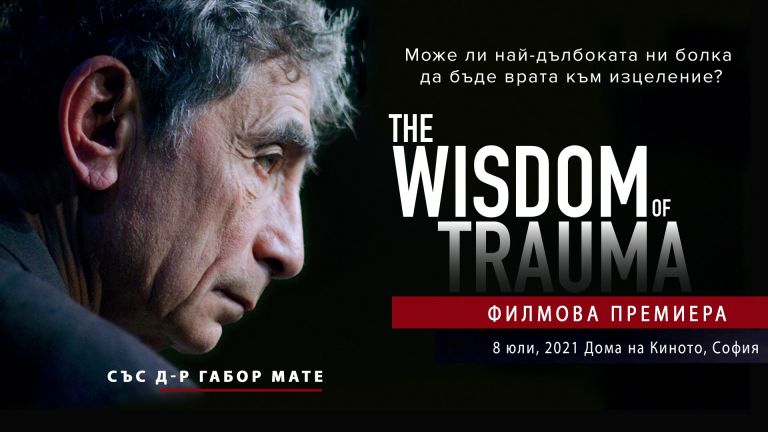 The documentary The Wisdom of Trauma will premiere in Bulgaria on July 8 at 6 pm and 8 pm at the Cinema House in Sofia. The next screenings are on July 13 from 18.00 and on July 14 from 20.00 again there.

Untreated trauma is an invisible force that determines every aspect of our lives. It has a strong influence on the way we live, the way we love, and the way we make sense of the world. It is at the root of our deepest wounds.

In The Wisdom of Trauma, Canadian physician Dr. Gabor Mate gives us a new vision of the world: a society that is aware of the effects of trauma, in which parents, teachers, doctors, legislators, and statesmen are not just trying to fix behavior, to diagnose, to suppress symptoms, and to condemn, and seek to understand the sources from which anxious behaviors and diseases in the wounded human soul spring.

This screening is part of the world premiere of The Wisdom of Trauma. In the first week, more than 4 million people from all over the world watched the film, and the reviews were more than 2,500. This is an incredible success for an independent documentary and shows the significance and importance of the topic it raises.

The creators of the film Ralitsa (Zaya) Benazo and Maurizio Benazo are coming to Bulgaria especially for the premiere and will answer questions live after the screening at the Cinema House.

Ralitsa Zaya Benazzo graduated in ecology and cinema. Born in Bulgaria, she has produced and directed several award-winning documentaries in Europe and the United States, including “Survival Energy,” “Gathering Hunger,” “Rays of the Absolute,” “Wings and Strings,” “Screaming Queens,” “American Chemicals.” angels “, her latest film is” The Wisdom of Trauma. “

She is also a co-founder of Science and Nonduality (SAND) – a global community inspired by the eternal traditions of wisdom, informed by modern science and based on direct, direct experience. Ralitsa is a co-author of the book “The Mystery of Being” – a collection of essays by leading spiritual teachers and scholars.

Information and tickets can be found: HERE