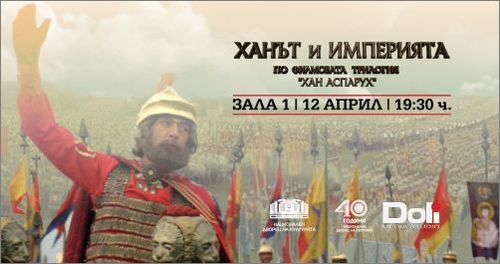 The Exclusive Screening of Bulgarian Epic The Khan and the Empire is Moved to April 12, 2021

Due to the anti-epidemic measures in Bulgaria introduced by Order of the Minister of Health, the exclusive screening of the film The Khan and the Empire scheduled for March 31, is moved to April 12, 2021, again from 19:30 in Hall 1 of the National Palace of Culture. All tickets purchased so far will be valid without revalidation, and the screening will be among the special events in the program of Kinomania.

One of the most beloved Bulgarian mega-productions Khan Asparuh is renewd and restructured under the title The Khan and the Empire. The new film is made out digitally restored image of one of the longest and most ambitious films in the history of Bulgarian cinema, the trilogy Khan Asparuh by Lyudmil Staykov.

In 1981, Khan Asparuh marked the 1300th anniversary of the founding of the Bulgarian state, and on March 31, 2021 with an exclusive screening the National Palace of Culture will mark 40 years since the official opening of the Palace. The premiere of the trilogy Khan Asparuh was in the legendary Hall 1, and nowadays with the premiere for the Sofia audience screening of The Khan and the Empire NDK pays tribute to the traditions of Bulgarian culture, which are the basis of its modern dimensions.

The voices are authentic and the sound and music are brand new. Digital technologies have been used extremely delicately as a means of updating the film, without affecting the authenticity and scale of the work, said Dobromir Chochov, founder and owner of Doli Media Studio.

This new film by Lyudmil Staykov tells about the tragedy, self-sacrifice and deprivation of the main character Khan Asparuh and the people of the Bulgarians on the way to their cherished goal – the creation of the Bulgarian state – 681. The story is recreated through the memories of a Byzantine hostage who involuntarily connected his destiny with the Bulgarians and became a living witness to great events that changed the map of Europe forever. The Khan and the Empire build a vivid image of a distant historical epoch against the background of the great migration of peoples and the clash of two different civilizations. The film strikes with impressive acting performances, epic battles and spectacular mass scenes, unusual for Bulgarian cinema. The distant epoch that is portrayed gives rise to associations related to our time. ”- shares Lyudmil Staykov.

By choosing an event to mark its 40th anniversary, the National Palace of Culture sends a message about the need to preserve our cultural identity, respect for traditions and a modern approach to art that continues to inspire the younger generations.

Tickets for The Khan and the Empire can be purchased at the box office of the Ticket Center – National Palace of Culture and online at tickets.ndk.bg

The whole program of Kinomania can be found at www.kinomania.bg