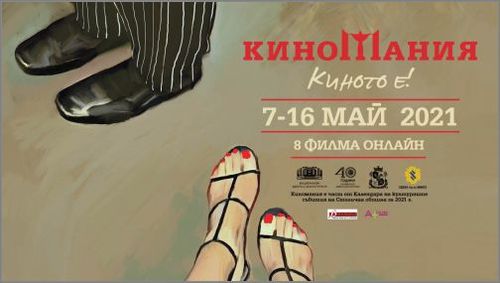 The 8 most Watched Movies from Kinomania Festival Go Online

The special selection will be available online between May 7 and 16 on Neterra.TV +

One of the most popular Bulgarian film festivals, which has delighted audiences for more than three decades, extends the program of this year’s edition with online access to selected titles. In the two weeks of April, Kinomania showed an exclusive selection of films from around the world, and 8 of the most popular ones will continue to be available to viewers online on Neterra.TV +. In this way, in partnership with the online content platform, a variety of film masterpieces will be able to be watched by even more viewers and reach audiences in all parts of Bulgaria. The 8 film productions will be available between May 7 and 16, and the preliminary sale of single and package tickets has already started.

The special surprise in the selection is the biographical film about the life of the Canadian superstar Celine Dion. French actress and director Valerie Lomersier herself plays the lead role in it, and so is her screenplay. The story traces Celine’s life as one of the 14 children in the Dio family in Quebec, when her talent began to stand out, through the meeting and relationship with her manager, and later her long-term husband, until she became one of the world’s famous singers. Celine Dion herself agrees to make the intriguing production, thanks to which we can enjoy some of her biggest hits that have conquered the world charts, as well as many other exciting performances.

3 more French titles will delight fans. The Big Hit by director Emmanuel Courcol is the winner of the European Award for Best Comedy and one of the favorites in this year’s program of the festival. The film meets a group of prisoners, led by a talented but often unemployed actor, who puts together with them the play by Samuel Beckett “Waiting for Godot”. An interesting development is coming when their success even leads to an invitation to a prestigious Parisian theater.

Albert Dupontel’s Bye Bye Morons has also been praised by both audiences and critics, winning six Cesar Awards, including Best Picture. The plot follows the strange adventure of a 43-year-old hairdresser who decides to find the child she abandoned when she was only 15 years old. She is helped by two eccentric men, emotions and fun are guaranteed.

Part of the incredible fate of the famous general and later President de Gaulle is intertwined in the film of the same name by Gabriel Le Bomen, also with 3 nominations for the Cesar Award, including for best actor Lambert Wilson. In addition to part of French history from 1940, de Gaulle shows an exciting development in life that actually changed the development of World War II.

In the online selection of 8 films, viewers from all over Bulgaria will have the opportunity to see the Italian “Best Years” – a master film about friendship and love starring four of the most popular stars of today’s Italian cinema: Pierfrancesco Favino, Micaela Ramazzotti, Kim Rossi Stewart and Claudio Santamaria.

The legendary names of the Oscar winner Istvan Sabo and the cosmopolitan Andrei Konchalovsky are also included in the online selection of Neterra.TV + with the current productions Final Report and Dear Comrades. After an 8-year hiatus, Sabo turns to the topics of morality, duty and forgotten dreams throughout the story of an established cardiologist who retires and returns to his home village to rediscover some truths. Konchalovsky’s latest film, Dear Comrades, won a special jury award at the Venice International Film Festival. The focus is on a secret pogrom of a peaceful demonstration in 1962 that took place in Novocherkassk.

Harry McQueen’s Supernova takes us to San Sebastian’s competition program in the company of the exceptional acting tandem of Colin Firth and Stanley Tucci. In a deeply moving and subtle way, the film explores the partnership between Sam and Tusker after one was diagnosed with early-stage dementia. The two take a trip with their old camper and discover more and more about themselves, their relationship and reality.

The special selection of 8 of the most watched movies from Kinomania will be available online between May 7 and 16 on Neterra.TV +.

From April 23, two types of packages will go on sale: full access to all films for BGN 24.99 or a single ticket for a selected title for BGN 12.

Kinomania is part of the Calendar of Cultural Events of Sofia Municipality.