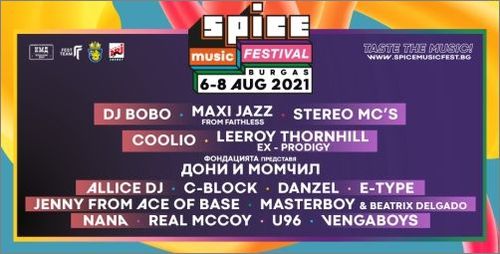 Two new emblematic names for the 90’s join the program of the Spice Music Festival, which will be held from August 6 to 8 in Burgas – E-Type and Jenny from the popular Swedish band Ace of Base.

Other popular stars from the 90s will arrive in Burgas with DJ BOBO with their remarkable show Kaleidoluna, Maxi Jazz – the founder and unique voice of the cult FAITHLESS, the British STEREO MC’s, Leeroy Thornhill – one of the founders of Prodigy, the bad boy of American rap COOLIO, without whose hit “Gangsta’s Paradise” the 90s would not be the same, C-BLOCK, MASTERBOY, NANA, Real McCoy, Eurodance pop band Alice DJ, Germans U96 and VENGABOYS.

The long-awaited gathering of Donnie and Momchil on one stage will also take place at the Spice Music Festival. Their joint performance will be with the musicians from the “Foundation” and is entitled: “The Foundation presents Donnie and Momchil”.

For the second year in a row, BOMFUNK MC`s have refused the pre-commitment and we will not see them in Burgas.

The three-day tickets for the festival are still priced at BGN 120 and can be purchased at Ticketstation.bg, in the EasyPay office network and in NaTamno stores.