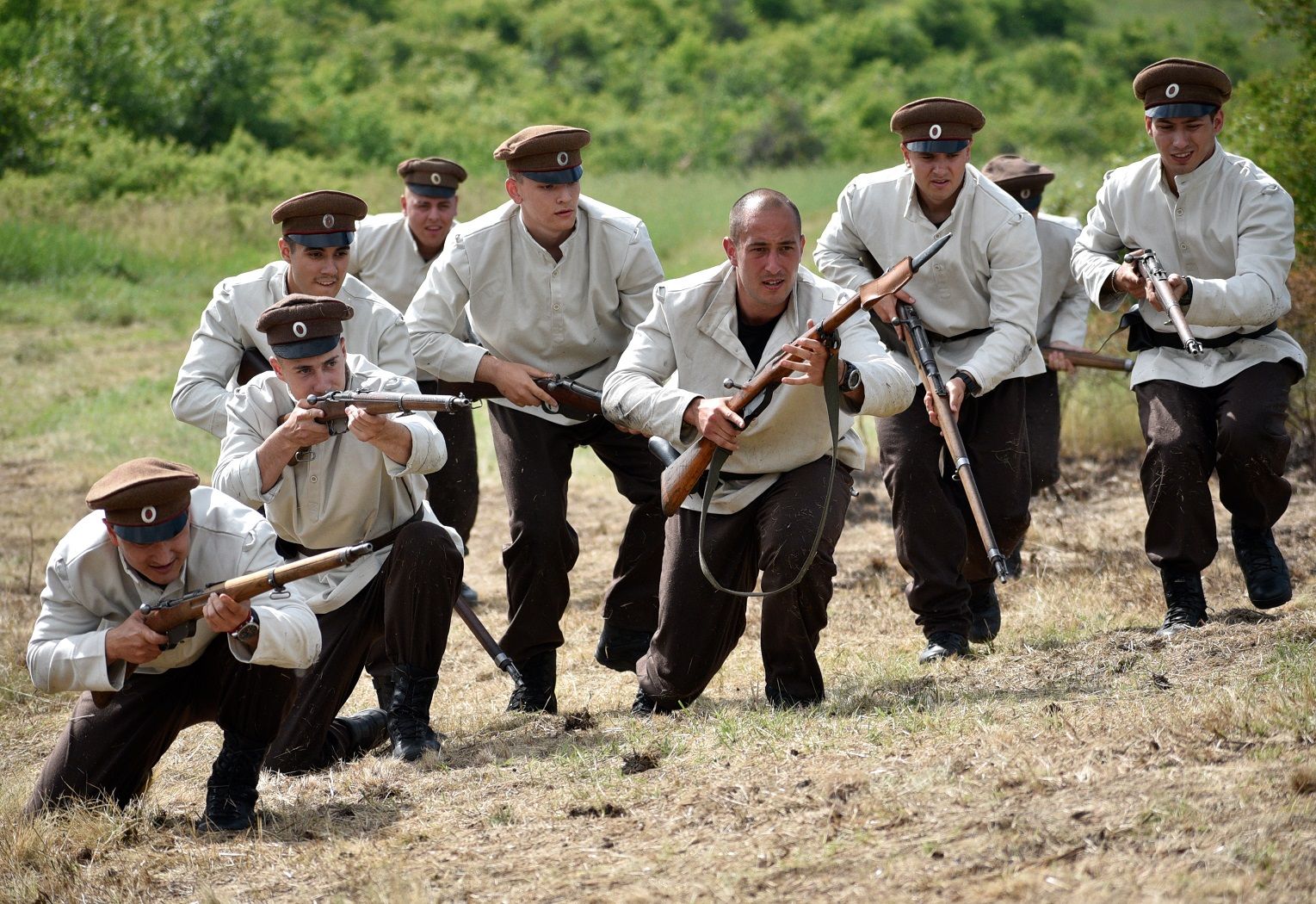 Soldiers from the First World War Filmed for a Short Film

The beautiful area near the Veliko Tarnovo village of Belyakovets for the shooting of a new, super-modern historical film has become a real battlefield. The production “Tutrakan 1916” recreates one of the most epic battles during the First World War – the Tutrakan epic, which led to the liberation of Dobrudja, and was shot by a joint project of the Historical Museum in Tutrakan Museum of the Lower Danube in Calarasi, Romania.

In just a few days, the meadows near the picturesque village became an arena of battle scenes, in which the brave Bulgarian warriors captured Fort 7 from the fortress and forced the Romanian troops to surrender.

Actors, 12 stuntmen and over 100 cadets from the National Military University “Vasil Levski” in Veliko Tarnovo reenacted the events from 1916. After five days of rehearsals, this weekend the actual shooting of the film will take place.

Especially for the production the higher military school provided the legendary Manlicher M95 rifles, model 1895, with which our ancestors participated in the wars for national liberation and prepared all the logistics on the battlefield, which is very close to the real place. The battle took place in 1916. The terrain is equipped with barbed wire, trenches, wolf pits, and a copy of the original dome cannon from 1916 is present on the set.

The ten-minute film, which is expected to be screened at the Tutrakan History Museum in November, is part of the ROBG-271 project – “Tutrakan-Calarasi – an innovative cultural bridge for sustainable regional development”. The coordinator of the project is Jenna Slavova, and the director of “Tutrakan 1916” – Nino Andreev. He especially thanked for the assistance of the Military University and Colonel Evgeni Penchev, Deputy Head of the University.

The team of BM Vision and the cameraman Boyan Milushev took on the difficult task of filming the fighting from the inside. For the first time in our country, a historical film is shot with state-of-the-art technology with 360-degree shooting and VR (virtual reality) technology, which will allow viewers equipped with special helmets and goggles to take on the role of soldiers and become direct participants in battle scenes.

Thus, visitors to the Tutrakan History Museum, who will watch the film, will not only be able to be passive observers, but also become real participants in legendary historical events with the help of the latest generation of virtual reality sets that allow 3D and acoustic perception.

We have an exhibition “Tutrakan Epic” in the Historical Museum and we want to renew it and make it closer to modern generations, to bring them into the past, to create interest and emotional connection of young people with the history of our ancestors.

The idea is for this film, which will be made with the help of virtual reality, to reproduce part of the battle, and this battle is important because the victory at Tutrakan marks the beginning of the liberation of all of South Dobrudja.

This film is a modern museum exhibit that will tell about the heroism of our ancestors and I believe that it will become a real attraction for tourists, “said the director of the Historical Museum in Tutrakan Petar Boychev.