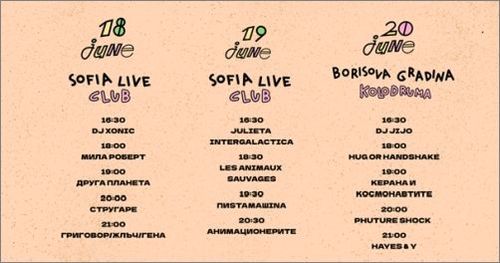 Sofia Live Festival moved the program in its first two days, June 18 and 19, indoors at Sofia Live Club due to the bad weather forecast, the expected heavy rainfall and thunderstorms.

The organizers say that the forecast for June 20 is promising, so the third day of the festival will be held outdoors at the originally announced place – the Kolodrum in Borisova Garden. Tickets for this day are still available for pre-sale at a price of BGN 20, and on the spot will be BGN 25. The entrance to the territory of the Kolodrum will be once for the day. The program for June 20 remains unchanged.

All purchased tickets will be valid without revalidation.

The doors in the three festival days at both locations will open at 16:30, and the concerts will start at 18:00.