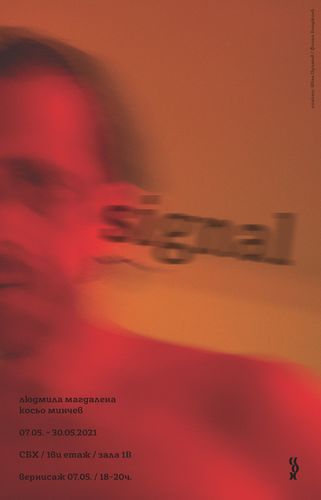 Kosyo Minchev and Lyudmila Magdalena are presented together for the first time in an exhibition, although they are connected in life and the exchange of creative ideas is probably part of their daily lives despite the distances and movement across the ocean. Kosyo Minchev, who has lived in New York for 25 years, comes with sculptures created there. Ludmila Magdalena has been engaged in photography for 10 years and in this exhibition, she shows unedited images, “images in living life”.

A series of coincidences led to the simultaneous opening of two exhibitions of the two authors in Sofia – SIGNAL at Shipka Gallery 6 (13.05. – 08.06.2021) and SON in One Gallery (13.05. – 04.06.2021). This duplication is a kind of performance, in which the streets between the two galleries unexpectedly participate, while the spectators move from one hall to the other, waiting to look for the difference, to see the nuances in the idea of ​​the two authors.

In SIGNAL Lyudmila Magdalena has collected photographs with “female sensitivity”, and in general calls the whole exhibition “female” – among the photographs we will see her self-portrait, and one of the four sculptures presented by Kosyo Minchev is her portrait.

In One Gallery is the exhibition with “male sensitivity” – among them are a self-portrait of Kosyo Minchev and his photo portrait by Lyudmila Magdalena; the presented photographs have “male images”, as defined by their author.

Vasil Zhechev about the SIGNAL exhibition:

The decay, the decay that follows us with the quiet rage of the neighborhood hooligan, always there, always in a place, and which reminds us with its presence of what we owe. The abstract obligation!

The obligation in the limit in which we are housed here. In which the flesh is defeated and smells of death. And in fear. And a desire for intimacy. And ready to sacrifice. In the name of intimacy.

Our resurrection seeks the love to dedicate itself to and to come out of the world of the mortal.

In all his hope for this, despair turned his gaze to the sensual and begged for a last chance. And love is there, untouched by time, a totem, an iconic image, a monument of passion. A fetish of desires, which, however, are already able to create. To create flesh, form and images, personalities, surrogates, projections, desires, promises, thousands of requests and lovely moments. Modeled even through the free will of our collective consciousness, which produces signals in the area of ​​our cultural observability.

Lyudmila Magdalena was born in 1976 in Varna. She graduated from the Art High School and NATFA “Krastyo Sarafov”, majoring in “Animation Directing”, in the class of Stoyan Dukov. She has been involved in cinema, television and advertising (in this creative field she is known as Lyudmila Gospodinova). She has participated in festivals with short films, animation and video installations, one of which was purchased by the National Gallery. She has participated in art causes for nature conservation. She won a competition of the Municipality of Varna for a conceptual design for a monument to Plamen Goranov, who set himself on fire in protest in 2013.

She has been working in the field of photography for 10 years and her first solo exhibition “Eternal Beloved” is in 2018 at the Arosita Gallery. Participates in a group exhibition “Photography after photography” curated by Gennady Gatev in One Gallery in 2019.

Kosyo Minchev was born in 1969. He graduated from the National Academy of Arts. He is one of the most visible and even scandalous authors related to the activities of the XXL group in the 90s. He is known for his provocative re-conceptualizations of classical painting and sculpture. He has lived in New York since 1997. He has exhibited his work throughout Europe and the United States, including Herring Kunstferein in Germany, the Wittgenstein House in Vienna, the Queens Museum of Art in New York, and the Beaumont Public Gallery in Luxembourg. His exhibitions have been the subject of many publications, including The New York Times, Village Voice, Sculpture Magazine, Woxx, Zeitung vum Lëtzebuerger Vollek and D’Lëtzebuerger Land in Luxembourg, Kultura and others.

Newer PostFilm About Bulgarian Climber Boyan Petrov with a Big Award from the Festival in Trento, Italy
Older Post Instead of a Self-portrait — The First Solo Exhibition of Lyudmil Georgiev in Plovdiv