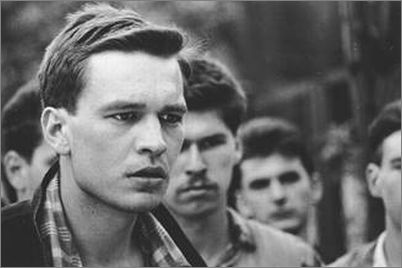 Screening of the film Poznan ’56 and a lecture by Polish director and screenwriter Filip Bajon — guest of the Department of Cinema, Advertising and Show Business at the New Bulgarian University

Where: Hall of the New Bulgarian University, Building 1

After the director’s participation in the jury of the Golden Linden International Film Festival in Stara Zagora and the presentation of his film The Butler, awarded with Silver Lions at the Polish Feature Film Festival in Gdynia, Filip Bajon will meet with students, teachers and moviegoers to talk about his film Poznan’56, to share his experience as a film and theater director.

Poznan’56 — a Polish historical film from 1996, which through the prism of the fate of the heroes tells about the general strike and demonstrations in Poland in 1956, called the Poznan Uprising, Black Thursday or June ’56.

The heroes of the film are two 10-12-year-old boys. Through their eyes, viewers can follow the developments in Poznan. An important element of the film are the vicissitudes of Zenek, a young worker, an involuntary leader of the protests, as well as the fates of five professors imprisoned in a car at Poznan Central Station and commenting on the situation in the city.

In Poland, Filip Bajon is known as a prose writer, screenwriter, famous and valuable film and theater director with approx. 30 films in his career (most also a screenwriter), 10 theatrical productions (including television theater), several works in prose.