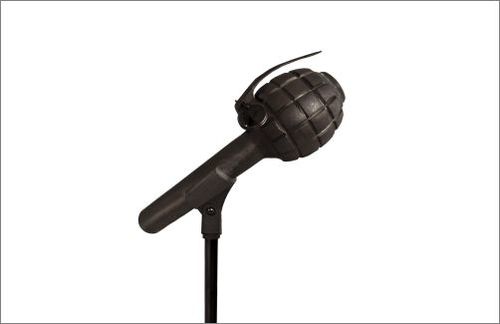 Sariev Gallery is pleased to present “pro homine” – the first solo exhibition of the Bulgarian artist working in Berlin, Mariana Vasileva in the gallery.

“pro homine”, literally translated, means “for man” and is a principle that is included in many international human rights treaties, according to which in the name of a person the norm must be used in a broader interpretation. Its basis, its source from an ontological perspective, is the dignity of a person in the face and the power of the state.

Mariana Vasileva’s exhibition metaphorically raises the question of the boundaries of the interpretation of the “pro homine” principle between political speech and the human right to life and self-determination.

In the center of the Sariev Gallery is the bronze work “Microphone”, 2021, representing a microphone, which, as close as possible, is seen to end with a grenade. The voice coming out of it can promise and persuade, lead forward; shouts the sworn declarations of power, the promises of politics, the pathos of the preacher, everything “for man”; it can kill. To kill literally, with the right of the strong, and symbolically, again with this perverted right to do so. To replace and distort the argument “pro homine” defending human dignity with the populist “ad populum” or the right of the majority.

However, this political voice in the exhibition is not the only one. There is also the muffled whisper of fragile vulnerability, and the pain of the individual caused by the voice of the “protector.”

But again there is the personality, the urge for liberation, the existential gesture of breaking with the status quo, the escape to oneself, to one’s body, and the right to hope.

For breathing as a right to life are the drawings of Mariana Vasileva with smoke. To breathe means to live and be free, but also to bear the marks of suffering in upholding this right. Like the prints on a woman’s body, injuries from touch, filthy encroachments on the physical, but also the mental; stigmas that ostracize the person who has shown the right to be himself. “Just breas”, the drawing entitled so, is the main credo of the artist that the body and the soul are inseparable in defending themselves.

For the right and imperative of man to exist as an individual in the unity of body, self-awareness and self-determination, are the photos from the video performance “Be Calm”, “Be Calm”, realized in Istanbul in 2017, during the 8-month residence of Mariana Vasileva there.

Mariana Vasileva’s latest installation “Selfmade 2”, 2021 is a kind of replica of the work “Selfmade” from 2011. And if in the work from 2011 the hands are harnessed with the barbed golden wire of habit, affection and memory, then in “Selfmade 2”, 2021, the body (in the installation it is symbolically represented by hand and foot) has already freed itself from the triple barbed wire, from the fence, from self-restraint, from any kind of obstacle and can be free.

Mariana Vasileva’s exhibition, in the media of sculpture, installation, drawing and photography, is her artistic position on the right to be an individual, free “for yourself” as a person.

The exhibition presents new works from 2021 and key older works by Mariana Vasileva. The opening took place on April 16, 2021, in the presence of the author, in Sariev Gallery, Plovdiv.