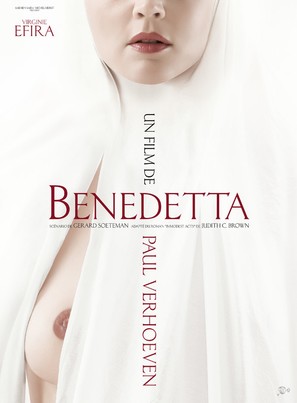 The film will premiere in Cannes on July 9, when it will hit theaters.

The film was already scheduled to take part in the competition program last year, before the coronavirus pandemic led to the decision to cancel last year’s edition of the film festival.

Paul Verhoeven, director of films such as Primary Instinct with Sharon Stone and She with Isabelle Huppert and Virginia Efira, has walked the red carpet of Croisette several times, but has never won an award for the prestigious event.

The provocative director, who often touches on the themes of sex and violence, this time takes the viewer to 15th-century Italy. Benedetta tells the story of a novice who enters a monastery in Tuscany. Capable of miracles from an early age, Benedetta immediately influenced the life of the religious community. However, when her affair with another nun is revealed, a scandal erupts, pushing Benedetta down a dangerous path.

In addition to Virginia Efira in the lead role, the cast of the historical drama, inspired by real events, includes Charlotte Rampling and Lambert Wilson.

Benedetta is the second production with confirmed participation in the competition program of the Cannes Film Festival, which will take place between 6 and 17 July. Earlier it was announced that the event will open with the film Annette by Leos Carax with Marion Cotillard and Adam Driver.

Although there is still no official confirmation, the competition program is expected to include the new films The French Dispatch by Wes Anderson and Three Floors by Nani Moretti.

The official selection of the Cannes Film Festival is expected to be announced at the end of May.

Newer PostNeo-romanticism. Landscapes from Arcadia in Vazrazhdane gallery
Older Post A Look at the Upcoming Phase 4 of the Marvel Cinematic Universe