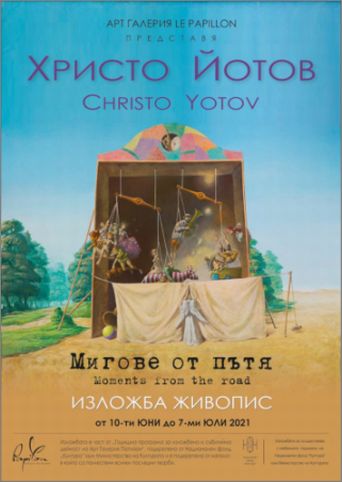 “Moments from the road”

“I believe in intuition and inspiration. Imagination is more important than knowledge. Because knowledge is limited, while the imagination covers the whole world and everything there will one day be to know and understand, stimulating progress, giving birth to evolution. ”Albert Einstein

With great pleasure from June 10 to July 7, 2021 Art Gallery Le Papillon presents the latest dramatic stories, transformed into paintings by the talented artist with inexhaustible imagination Hristo Yotov. Served with an elegant sense of humor, these captivating imaginary tales of people and ordinary life passions often act as a wonderful film or theatrical production. All his paintings show the rich soul and high intellect of the artist, deep knowledge of human nature and his ability to have fun, to observe the world from the high position of a creator who loves his characters. And in combination with his fine painting feeling, his virtuoso handling of the brush, mixing classic techniques and daring experiments, his complex multi-figure compositions absorb the viewer’s attention like the magic of an ancient magician.

The works of Hristo Yotov invariably capture the attention of every viewer with a curious spirit and high artistic requirements and are eagerly awaited by collectors from several continents and connoisseurs of contemporary art. Yotov is able to compose philosophical stories in his paintings – strange and unprecedented, in which the main role is assigned to the Personality and its experiences. With picturesque persuasiveness, a thin brush, often resorting to surreal techniques, he skillfully recreates the rich range of emotional states that his characters go through – from inner struggle, through determination, discovery, enthusiasm and happiness, to ecstasy and euphoria. With ease, but in complex compositions, as if as a frame, capturing the movement and transformation, Yotov reveals to us a parallel reality in which everything is possible and achievable. There we can trace our reactions and values, veiled and coded, through the symbols characteristic of his handwriting. In the plots, as part of his turbulent dreams, we recognize the universal features of various characters placed in an extreme situation. Very often in the paintings the main plot line is supplemented by elements that escape the consciousness at the first meeting with the work. When we dive, however deeper, the hidden faces, objects and elements stand out one after the other, often from the dark and everything falls into place – the viewer discovers the logical connection, which becomes obvious.

Everything in Hristo Yotov’s work is unusual and follows its own rhythm, like a river that flows, but is never the same. Nature and clouds reinforce this sense of destiny and drama as during epoch-making events. Each image is the unfolding and exploration of a new human universe, of a new soul. It is important for him to feel the inner boiling of the characters, to analyze freedom – even though it is as inexplicable as the characters themselves. We see them aspiring, purposeful, uncompromising, reminding us that the power of the human spirit is the engine of every achievement. With them, every goal and dream is possible, as long as the efforts are directed in the right direction. Each character has a role and a precise place. Even seemingly chaotic or mutually exclusive images are actually in harmony and complement each other in a perfectly constructed composition. The frequent physical nudity of his characters is an expression of the permanence of their experiences and aspirations, and these bearers of recognizable accessories determine their exact trials. Yotov is an author with an undeniably rich emotionality and imagination. His characters are symbols of imaginary expressions, some hidden behind masks, others expressing pure frank strong emotions, but all are active participants in the spectacle of life, where each of us can find himself.

The main meaning of high-class art is to categorically provoke the audience’s thought, to magnetically capture the attention, but also to imperceptibly upgrade the viewer’s awareness, to develop his emotional intelligence and aesthetic censorship. This additional award goes to fans of Yotov’s work, along with the good mood from the colorful fun plots, as well as the mental puzzle – a challenge for the intelligent observer, all presented with a very high level of painting with fine details and beautiful sculptural forms.

And if Jasper Ford’s statement that “the imagination of a genius provides ideas for maniacs twenty years ahead” is true, then the plot threads in Yotov’s paintings fill the viewer with stories to analyze over time. That is why his works are a passion for many collectors from all over the world.

About Yotov: “The magic to express yourself, and to see yourself in the viewer’s delight in front of the picture. Behind every new touch is a surprise that is part of the great creation! “

The exhibition can be seen from June 10 to July 7, 2021 in the exhibition hall of the gallery in Varna, 12 Dragoman Street, and can also be viewed on the website artpapillon.com

The exhibition is part of the “Annual program for exhibition and event activities of Art Gallery Papillon”, supported by the National Fund “Culture” at the Ministry of Culture and is supported by a catalog that includes both the latest works of Hristo Yotov and a selection of his work over the years.