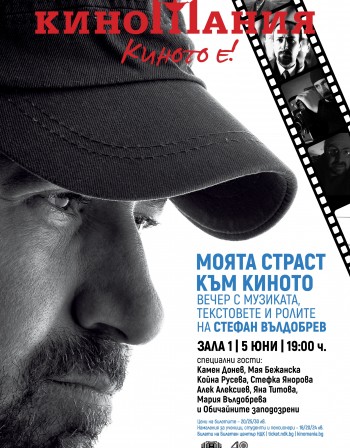 “My passion for cinema” is a special event of Kinomania, in which the actor, singer and composer Stefan Valdobrev will show and tell more about his music and roles related to cinema, as well as introduce us to his favorite movies. In this endeavor, scheduled for June 5 from 19.00 in Hall 1 of the National Palace of Culture, he will be assisted by his close friends and colleagues who will be guests of the evening.

Among them are: Kamen Donev, Maya Bezhanska, Koyna Ruseva, Stefka Yanorova, Alek Alexiev and Yana Titova. They are connected with different moments of his life and work, and with the actresses Koyna Ruseva and Stefka Yanorova they are united by memories from his native place. As a guest of the event, we will see Valdobrev’s daughter – Maria, who is engaged in cinema.

“My idea is to have something like a late-night show – a cozy evening with friends, laughter, reading, stories and singing,” says Valdobrev, adding that many shots of films with his participation will be shown during the evening as well as from films from his childhood, which he admired.

The audience will be able to hear excerpts from the “Book of Songs”, which Stefan Valdobrev created on the occasion of his 50th anniversary (which was in May 2020), accompanied by the performance of the songs to which the lyrics refer.

“My passion for cinema” can’t help but pass without “The Usual Suspects” – the group whose frontman is Valdobrev. Viewers in Hall 1 will be able to enjoy several iconic pieces of the band related to films. According to anti-epidemic measures valid until March 31, 2021, the announced screenings of the Kinomania program in April remain unchanged, and tickets are on sale.