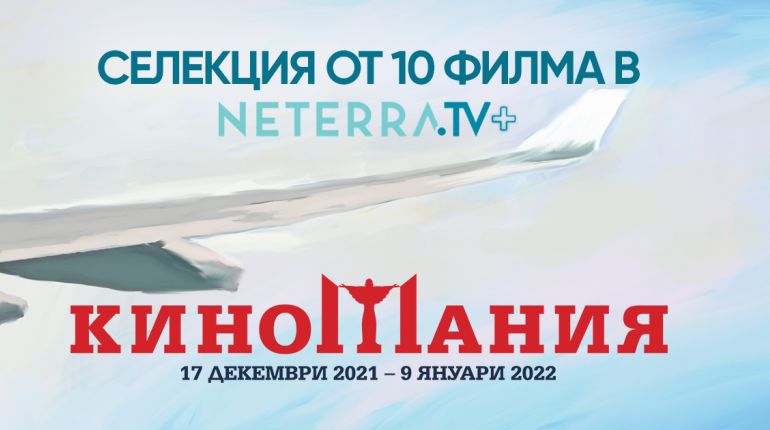 The physical edition of KINOMANIA is over, but the most ardent fans will enjoy a great Christmas present – 10 of the hit titles will be available to watch online on the Neterra.TV + platform. The films will have single and package prices and will delight moviegoers in the period December 17, 2021 – January 9, 2022. The online selection includes festival hits, French cinema, musicals, classics.
In partnership with the online content platform Neterra.TV + the various film masterpieces will reach more viewers in all parts of Bulgaria. Here are the selected titles:

Marriage in Italian – directed by Vittorio de Sica, born 120 years ago. The emblematic production starred Sofia Loren and Marcello Mastroianni and was awarded the Golden Globe for Best Foreign Language Film. The rich man Domenico lives with the prostitute Filumena, who entangles him with lies in order to marry her. Great movie and one of the most memorable partnerships between Lauren and Mastroianni.

The king of the whole world – the virtuoso Carlos Saura. The Spanish-Mexican production features four young dancers and recreates traditional musical dance traditions in Mexico, where tragedy, fiction and reality intertwine in a unique way.

The Crusade – with Leticia Casta and Louis Garrel, about parents who reveal that their 13-year-old son sold family valuables to finance a project that will save the planet.

The young lovers – with the participation of Fanny Ardan, whose story shows the relationship of a 71-year-old lady with a much younger man. A story of passion that turns everything in its path.

The worst person in the world – awarded the prize for female role in Cannes for actress Renate Raineswe. At the center of the plot is Julie, a young woman in her early 30s who is experiencing an existential crisis because she is not a person prone to commitment.

Bergman Island – starring Tim Roth, Vicki Cripps and Mia Vasikovska. A couple of filmmakers leave for Forio Island, famous for the fact that Ingmar Bergman lived and worked there, but there the line between real and imaginary is gradually disappearing.

The Last Bus – After the death of his beloved wife Mary, retired Tom decides to take a long journey. Carrying the deceased’s ashes in a small suitcase, he set off from the northernmost point of Scotland to the southernmost point of the island.

My heart is dancing – a gorgeous musical by director Nacho Alvarez, a spectacle of colors, lavish costumes, comic scenes and perfectly choreographed dances, in which we will hear the songs of Italian and Spanish pop icon Rafaela Kara, who left in July this year.

If you have not yet chosen what to give for the upcoming holidays, Kinomania and Neterra.TV + offer a great opportunity for all lovers of quality cinema and shared emotions.

Tickets for all titles from the selection are available without a subscription for the whole of Bulgaria, offering the following options: 1 film – BGN 8, 3 films – BGN 20, 5 films – BGN 30, all 10 films – BGN 40. You can now to find them HERE

The Kinomania project was implemented with the support of the Ministry of Culture. Kinomania is part of the Calendar of Cultural Events for 2021 of Sofia Municipality. More information about the films can be found at www.kinomania.bg