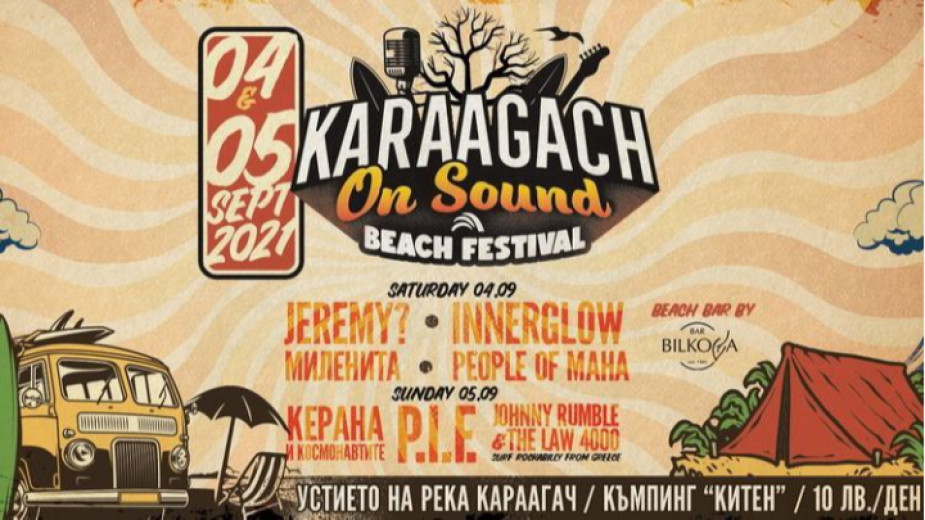 Karaagach on Sound Beach Festival – the New Element of Summer

There will be a new festival in the summer. A real beach festival that wants to bring back “this forgotten feeling of summer charm, of sitting until late at night on the sand, the fires, the laughter, the stars, the conversations”. With these words began our conversation with the two colleagues Kalin and Svetoslav, who decided, happily sitting in front of the caravan and looking at the sea, that camping Kiten, and more precisely the magical place where the river Karaagach flows into the sea, is the perfect place for a festival. to capture both the free spirit and the romantic atmosphere that “goes” with the camping culture.

At first it just occurred to them to invite “some friends – a Greek band, a very nice rockabilly band. And word for word, things started to grow, we got the support of the people who run the campsite and it was as if we all dreamed and waited for something like this. happened here “- says Svetoslav, who otherwise in real life deals with risky investments.

“And he keeps telling us that this festival is a risky venture,” Kalin said. He is a musician, more precisely a pianist, currently part of Akaga and Slang. He is responsible for the good music selection for the two evenings of the festival – Jeremy, Innerglow, PIF, Kerana and the astronauts, Milenita.

“When we shared this idea, everyone accepted it with great enthusiasm and the musicians, who immediately agreed, and the people here. Moreover, it turns out that in our campsite we have people for a whole festival team – one deals with advertising, another – with shooting … “- add Kalin and Svetoslav. Their enthusiasm is contagious and makes for a nice summer event.

“And because we are both fathers and we know how difficult it is to go to such an event with the children, we have planned a varied children’s program every day – galleries, painting, dancing (Lindy Hop dance studio responded immediately – there will be swing and jive. .. we want to invite a lot of street musicians to play in different locations in the campsite during the day, to make things so that we cry when we leave “- Svetoslav continues, adding the name of the women’s band People of Maha, “not only three beautiful ladies, but also with the good story of one of them, who two years ago came as a volunteer from Brazil, but falls in love here, gets married and so on …”.

That is, all the ingredients for a good festival are there – a beautiful place, a beach, stories, great musicians and that elusive charm that is felt at the campsite.

All this will happen on September 4 and 5 (Saturday and Sunday of the long weekend, including the festive September 6) under the name Karaagach on Sound Beach Festival.