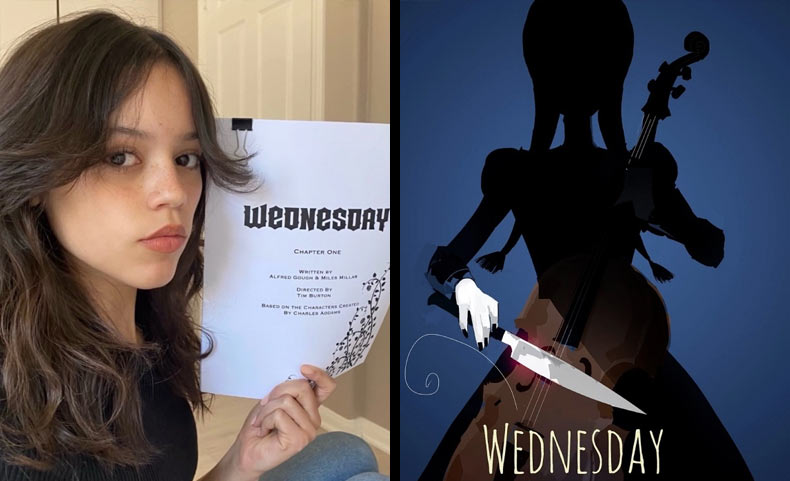 At the beginning of the year, Netflix finally put the cards on the table and officially announced that their long-awaited project, which aims to revive the cult characters of Charles Adams, will not actually be a typical remake, as it will put in the spotlight not the whole family. , and only the guru of the Gothic style – Wednesday Adams. The rumors that the bold series will be led not by anyone, but by Tim Burton himself. As already mentioned, the vicissitudes of the Adams household fall exactly into the director’s comfort zone, and the only thing missing in the whole “family” idyll was who would enter the image of Wednesday. A few days ago, however, it became clear that the role of gothic Pippi Longstocking will be entrusted to Netflix favorite Jenna Ortega.

The plot of “Wednesday” will be a supernaturally-infused coming-of-age story “and will mainly revolve around the teenage years of Wednesday in the Nevermore Academy, where she will try to thwart a monstrous series of murders terrorizing the city, and solve a 25-year-old mystery concerning her parents. In the meantime, Wednesday will have to master not only her killing hormones, but also her telekinetic abilities.

The adaptation is the work of showrunners Alfred Goff and Miles Miller, who we associate with other successful television productions, and for Burton “Wednesday” will mark his debut on the small screen, being the director and executive producer of all 8 episodes. The executive production team also includes Kevin Misserochi, who is part of the Tea and Charles Adams Foundation.

As for the rising star Jenna Ortega, she proudly shared on her social media profiles:

“A new chapter.” I hope I can respect Wednesday Adams.

Strategically, there is no doubt that Jenna Ortega is the right choice. The series will obviously appeal to a young audience, and the name of Ortega, known to young people of the days and a star of the Disney Channel, will undoubtedly attract a lot of attention. In addition, in recent years, Ortega has proven that it is following in Zendeya’s footsteps, and has successfully managed to break away from “children’s” channels, focusing on high-budget productions. For the last year she has been in 3 productions of Netflix, including the popular series You “, and next year we will see her in” Scream 5 “. Of course, we can’t ignore the fact that Ortega is of Mexican descent, which has two rabbits in one fell swoop – both politically correct and there will be no unnecessary grumbling on social media about incorrectness, and, come to think of it, it’s really appropriate. for her heroine, whose father is still called Gomez.

On the other hand, Jenna Ortega has both the look and the acting skills to play a modernized Wednesday. The possibility is not to be compared with the magnificent performance of Christina Ritchie, but still everyone understands his character in his own way and this is what makes each incarnation unique.

So far, each new addition to the Wednesday team hits the top ten, so we continue to follow the development of the series with interest and honestly we can’t wait to see who will put Gomez’s mustache.