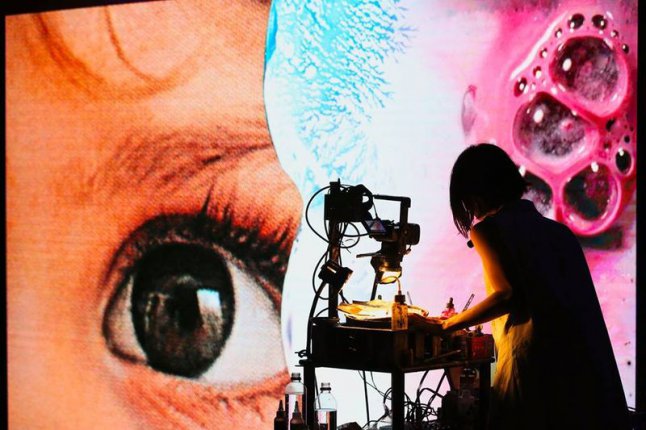 The Japanese star who was in Sofia presenting her performance Alive Painting around this time last year is coming back. The reason is the great interest shown by the audience of the House of Cinema in December 2017 when the artist immersed spectators in stories, going through the whole spectrum of emotions to come out purified and still.

Akiko Nakayama returns to the Bulgarian audience to stand on stage on November 8th at 9 pm in the House of Cinema with the musician E.U.E.R.P.I., who will create a sound environment, contributing to the performance and make it into a true abstract live cinema.

This time, Akiko comes not only with a new performance, but also with a solo exhibition where we will see the “live paintings” frozen at the moment of action. The exhibition will be opened on Thursday, November 1st, on the Day of the National Enlighteners at 18.30 at the Arosita Gallery (12B Vrabcha Street). This is the first and only one-time exhibition of the Japanese star in Bulgaria and will stay for two weeks until November 14th.

We will meet live with Akiko Nakayama in the gallery on November 8 at 5:30 pm, when is the big day of the performance. There we will be able to hear from her about the technique of working, the ideas and how Akiko makes her paintings “come alive”. After the discussion, in the House of Cinema, the audience will be able to flow into the sparkling and bubbling energy of the motion, colors and digital technologies in the performance “Alive Painting” and see how the “living” paintings are created under the sounds of Mirian Kolev (E.U.E.R.P.I ). It was with this performance that Akiko Nakayama won the TEDx Haneda, Japan, two years ago.

Akiko Nakayama was born in Tokyo. She is an artist who gives a new dimension to traditional Japanese dyes, describing the beauty of the overflowing energy through various mediums such as installation, photography and performance. Working with the movement and vitality of the colors combined with digital technologies, Akiko Nakayama makes pictorial paintings, calling her performance “Alive Painting”. It depicts the resonance between shapes and textures, using different types of liquids, each with its own characteristic.

The event is organized by DOMA Art Foundation, in partnership with the Arosita Gallery and the House of Cinema.