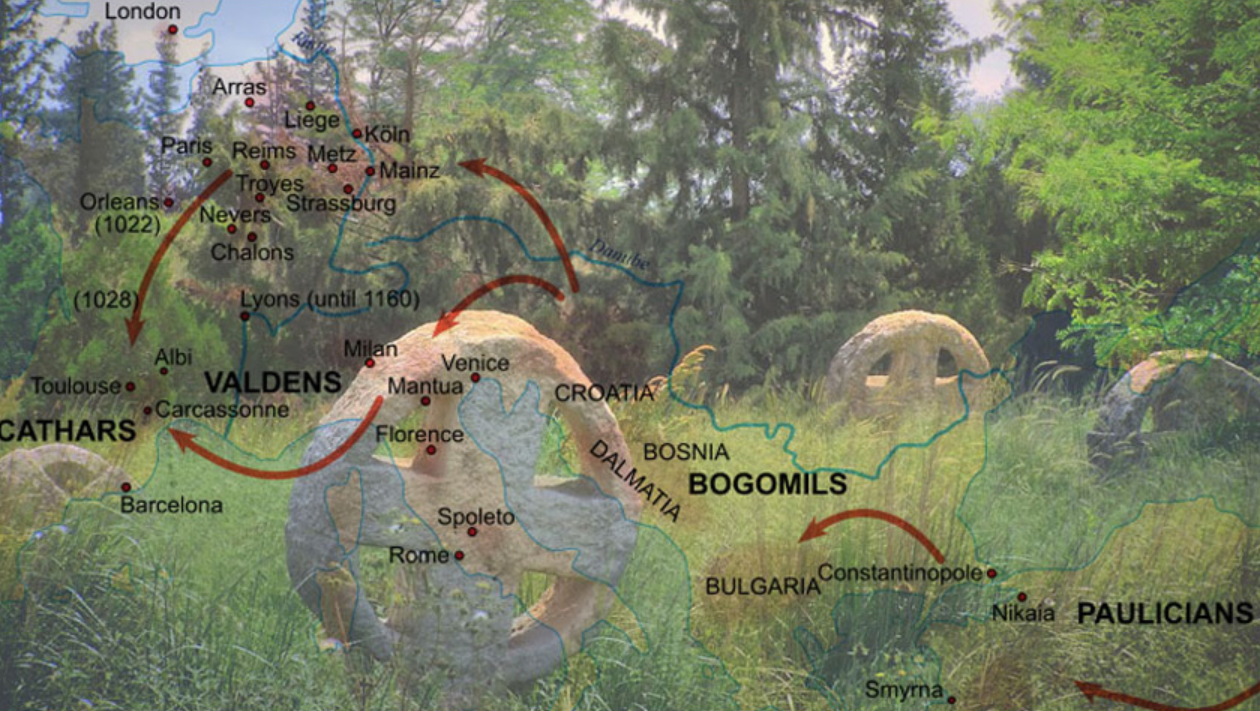 Italian Made a Film About the Bogomils, the Premiere is at the Sofia Film Fest

Italian director and screenwriter Fredo Vala, who has made dozens of documentaries commissioned by the Vatican’s TV 2000, has shot a film about Bogomilism. The screening of the film is scheduled for March 21 at 2 pm at the Cinema House within the Sofia Film Fest.

The large-scale co-production of France, Bulgaria, Bosnia and Herzegovina traces in 200 minutes the birth of the Bogomil doctrine in the 10th century and its spread in Europe.

Bogre is a journey through time and space in the footsteps of the Cathars and Bogomils – the heretics of the Middle Ages, who reached from Bulgaria to Western Europe.

“Those who speak Occitan know that ‘bogre’ means Bulgarian, but for centuries the word has taken on the meaning of ‘scoundrel’, to – who conceals the truth. In the twelfth century, “bogre” was used as an insult to the Cathars of Occitania, likened to the Bulgarian Bogomils, from whom the Western teaching of the Cathars actually originated. For their part, the adherents of these heretical teachings called each other “good people” and “good Christians” because they thought they were returning Christianity to its original purity, “Fredo Vala said in an interview with BNR.

The Cathars and Bogomils supported the idea of ​​God, based on the existence of good and evil or the opposition between spirit and matter. Bogre rediscovers a theme erased in history textbooks and, as a heresy that crosses the European Middle Ages, makes us reflect on our recent past, marked by persecution and genocide such as the Holocaust, and on the present with its manifestations of intolerance. , note the film’s creators.

The team visits and photographs Preslav, built as the first Christian capital in Europe, as well as the Rila Monastery during the night vigil on October 19 for the Assumption of St. Ivan Rilski, the Tsarevets fortress and the Patriarchate, the monastery in the village of Krepcha and many other places. Among the scientists with whom Vala talks in the film are Prof. Kazimir Popkonstantinov, Prof. Aksinia Dzhurova and Assoc. Prof. Dr. Georgi Nikolov.

“I live in the mountains at 1350 meters above sea level against a pyramid-shaped massif, as children usually paint mountains. This is Monviso, a very famous peak in Italy because the Po River springs from there. I did various activities in my life: I was a craftsman as a blacksmith with my father, then I became a children’s writer. I have published about 30 books, not only in Italy and Europe. I have worked in Italian magazines and important monthly magazines such as Iron. I also worked for Mickey Mouse. In the early 90’s I realized my dream to make a movie – I graduated from the school of Ermanno Olmi. Since then, I have been involved in cinema, and when possible, television. As a director, I make documentaries. I like this genre because people talk about themselves. In feature films, I’m primarily a screenwriter, “says Fredo Vala.

“I live in an alpine region where the language of the troubadours, also known as Occitan, is spoken in southern France all the way to the Pyrenees. In Italy, in the Piedmont region, there are 12 valleys where this language is spoken. It is not protected, it was very prestigious in the Middle Ages through the poetry of the troubadours. As a young man, I was interested in this language and culture, and more than once, along with the stories of the troubadours, I came across those of the Cathars, related to the history of southern France. When I was in Bulgaria for the realization of TV series, I met many scientists. Then I discovered that the Cathars belong to the society of the Bulgarian Bogomils “, added Vala, when asked where the idea to make a film about the Bogomils came from.

I chose Bogre – the great European heresy for the title of the film because it was really the great European heresy, developed in the Balkans from Bulgaria, in northern and central Italy, southern France, which is also called Occitania. It also affects Bosnia, Flanders and part of Germany. A movement in the Middle Ages with a very wide distribution as a church alternative to the Roman Catholic Church or the Eastern Orthodox Church in Constantinople, “explains the director.

Making a film about the Cathars and the Bogomils is extremely difficult because a film is made up of images, not just words admits Fredo Vala.

“The Bogomils and the Cathars did not have churches, places of worship, they did not leave frescoes or sculptures. According to them, the church of God is a community that gathers in one place, such as in someone’s home or other room or outside in nature. That is why I decided to go to the places where the Bulgarian Bogomils and the Western European Cathars saw with their own eyes. So I looked with my own eyes and the eye of the camera at the places where they lived. I was in Preslav, where Presbyter Kozma probably wrote his tenth-century treatise against the Bogomils. I was in Veliko Tarnovo, where Tsar Boril anathematized them in front of a large church council. I was also in the Rila Monastery, and then in the Duychev Research Center. There, Aksinia Dzhurova and I reviewed ancient codes belonging to the monastery libraries, codes through which the monks could recognize heretics. It was unique as an experience to even look at these books and codes from the 12th, 13th and 14th centuries. I would say that my choice was to be not only a director, but also a historical researcher, a person who moves in those spaces, in those places in search of a trace that is not visible, because it is not an image, but only an imagination. “

According to Fredo Vala, the historical moment reflected in the film Bogre fits into the current European reality.

“Just thinking how in the Middle Ages an idea of ​​faith in God emigrated from Bulgaria to the West, spreading to Italy, Bosnia, France, Flanders and Germany. Europe is in this. Europe is an idea, spiritual or otherwise, that migrates into this vast territorial space that we call Europe and takes root in it. That is the meaning of Europe. The Middle Ages were not as dark and gloomy as many of us have learned from school textbooks. There were ideas and those ideas traveled, but not by car or digitally. They traveled on foot, on horseback, by carriage, by caravan, and by trade. They traveled and how they only traveled!

The distribution of Fredo Vala’s film is in the hands of an English agency, which offers it on various televisions in Italy, France, Canada and Poland.

“Unfortunately, due to the pandemic in Italy, cinemas are closed. We are waiting for them to reopen to start the already scheduled screenings of the film in various Italian cities, as in France in the summer and autumn. I am very pleased with Bogre‘s international debut in Bulgaria at the festival in Sofia, because it is officially presented. It was ready months ago, but could not be shown due to the pandemic. Now the film is officially presented where Bogomilism was born. It seems to me that this closes a circle, which is very nice. For me, it is a significant initial signal for his journey to the West from the Balkans, where the idea of ​​the Bogomils originated, spread to the West, adopting different names, but remaining deeply connected with Bulgaria by the name “bogre”.