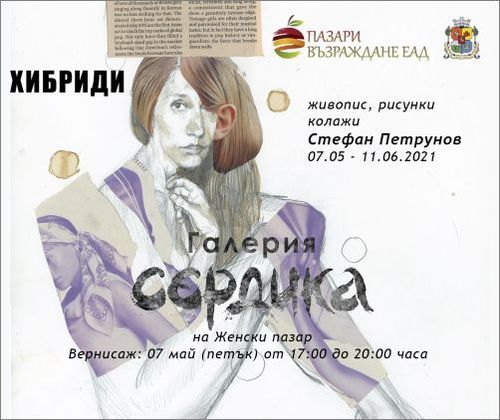 Gallery Serdika presents the new exhibition of Stefan Petrunov HYBRIDS —  paintings, drawings and collages, which will be shown from May 7 to June 11, 2021 in the art space of Women’s Market in compliance with all anti-epidemic measures.

This time Stefan Petrunov will confront us face to face with fantasy creatures, dreams and fictional scenes that make us renegotiate with ourselves the boundaries of the known and the unknown, internal and external. Rethinking the attitude to the depicted” objects “requires an assessment of whether they are a source of threat or attraction – probably both, says Dr. Ani Venkova about the author’s new works.

Undoubtedly, the works of Stefan Petrunov surprise, provoke and magnetically attract with their “unearthliness”. The encounter with them is a peek from the other side of the mirror, where one’s own reflection and that of the surrounding world are transformed. Through the clash of mutually exclusive elements, different cultural models and epochs, the artist creates a new universe, changes the way of thinking and activates the imagination.

The human body is an object of interest to Stefan Petrunov. It examines the psychological states, social positions of the individual and their reflection in body language. The female figure dominates Petrunov’s work. By taking it out of a certain context and placing it in a new one, mystifying its image, the author builds his own, idiomatic, artistic language, in which he includes other motives, combining them in unexpected configurations.

Even static, figures are rarely passive. The postures of the bodies are tense, bending, “S” -shaped, they hint at movement, causing discomfort to the viewer and involving him in a plot in which to look for cause and effect, beginning and end, previous and subsequent “stop frames” events. . The author deliberately makes the viewer ask questions. Relying on the element of surprise, through the inclusion of unexpected visual comparisons and thought puzzles, he puts us on the border of the rational, between dream and reality, life and death.

Beautiful faces of perfect proportions in women’s bodies, often models from magazines, have been replaced by animal skulls. The images are hybrid, mutating (similar to modern culture) defining their own parameters and identity, violating the conventions of beauty.

Technically and stylistically, Stefan Petrunov’s art can also be defined as hybrid. The realistic image is lined with collage, clippings from glossy advertising, with borrowings from surreal visions and expressive overlays. There are direct references to Pop Art. The color is bright, saturated, “fauvist” intrusive, obsessive … But at the same time lively and energizing, strongly present and influential.

Drawing is a catalyst for his art. It is an independent artifact, the main element around which a collage or sketch develops, on which the painting unfolds. For the author, painting embodies thinking, becoming a living act of creation …

It is logical that among a generation that feels increasingly comfortable within the open confines of identity and masters the enormous toxic and transformational fluidity of the Internet, artists should create aesthetics rooted in change and hybridity. The constant state of transition is a constant. In a sense, everyone is subject to mutation. This quest to explore and transcend the boundaries of human experience, no matter how disturbing it may seem – to reconstruct and rediscover the body – gives rise to some of the most vibrant and complex arts being created today. Among them fully fits the individual artistic language of Stefan Petrunov. “- Dr. Ani Venkova