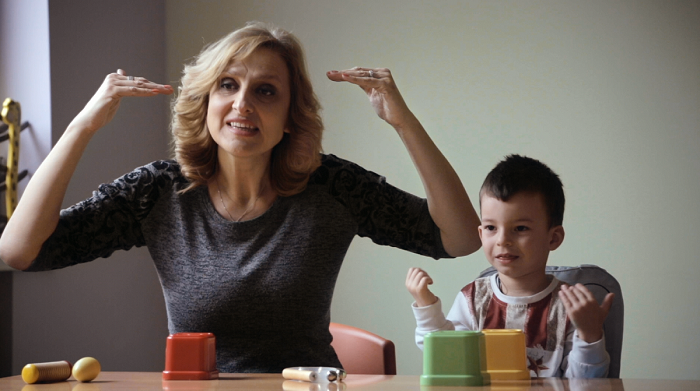 Tanya Dimitrova, the sign language interpreter who became a public figure of sorts due to the Covid-19 briefings that have been happening for almost a year now, is the main character in the new documentary Silent Legacy. The production will be available on the HBO Go platform and on HBO TV from March 23. Petya Nakova’s film is a co-production between HBO Europe and Contrast Films.

Silent Legacy offers a close look at the personal lives of Tanya Dimitrova and her family. The four are facing a difficult period in their lives. Apart from being a translator, Tanya also works as a therapist in her educational center for deaf children. She puts heart, strength and energy into her work with young children with cochlear implants – devices that help children hear. She has dedicated her professional and personal path to the cause that these children have an equal chance for realization in mainstream schools like everyone else.

2017 brings an unexpected ordeal for the family and Tanya is forced to go abroad for treatment with her husband. Her older daughter, Cathy, then 20, took over responsibility for the center, as well as caring for her younger sister, Yana. Cathy is facing a personal difficulty and a professional challenge for which she is not prepared. The film shows how the strength of family and friendship is enough for a mother and daughter to cope together and separately, each with the obstacles they face.

Director and screenwriter is Petya Nakova —  author of the book “The Year of the Eight Chemistry” and director of the documentary “Rom Quixote”. She is also a friend of Tanya. She started following her work at the center in 2015 with the idea to show positive examples of children with cochlear implants, which they begin to hear after many years of rehabilitation.

Executive producers are Hanka Kastelicova, director of documentary productions at HBO, and Katya Trichkova from Contrast Films. The music is by the composer Georgi Strezov, who already has significant experience with Bulgarian and Hollywood productions. His production company has made music for a number of international films and series, including “The Crown”, “Aquaman”, “Solo: A History of Star Wars” and others.

Even before its premiere, the film has already been selected in the program of Bulgarian documentaries at the Sofia Film Fest (March 11-31).So far, HBO Bulgaria has produced two original documentaries – Concrete Pharaohs about the life of the Kaldarashi and Hotel Rai for a group of Roma and their life in a dilapidated panel block on the outskirts of Yambol. Silent Legacy comes after a ten-year break without local production and opens the possibility for a Bulgarian documentary to be seen by a large international audience in much of Europe.