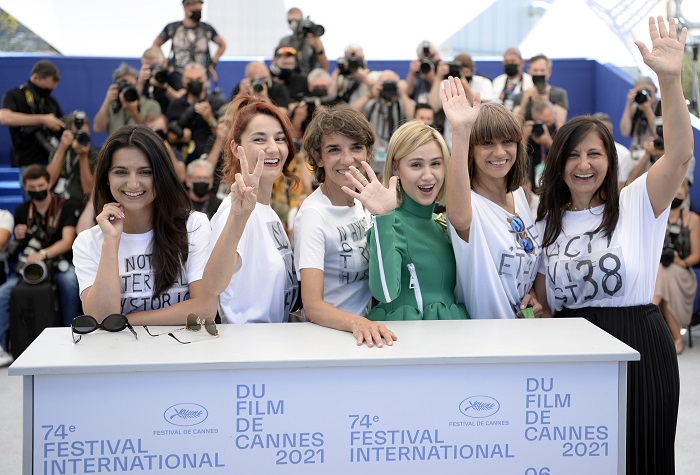 First Reviews after the Premiere of Women Do Cry in Cannes

Bulgaria in the film is a country where men behave like predators and believe that everything belongs to them, critics say.

Women Do Cry, the only Bulgarian film to represent the country at this year’s Cannes Film Festival, premiered on July 14th. The directors Vessela Kazakova, Mina Mileva and the actress in the lead role Maria Bakalova posed on the red carpet before the presentation of the production program Special Look.

Hours after the world premiere, the details of the plot became clear – Bakalova plays Sonya, an HIV-positive young woman who understands that her partner is not only married and has a child, but has also infected her. The discovery is like a bomb thrown into the heart of her family. Sonya has to fight the prejudices about her illness in Bulgarian society. Ralitsa Stoyanova plays her sister Lora, the two live together in a small apartment and have a very complicated relationship, full of loud scandals.

In another apartment, their aunt Veronica (Bilyana Kazakova) realizes that her life has been reduced to a huge commitment to raise her child alone. She obviously has a husband, but his image appears only through the telephone receiver and from his words it is clear that the situation is completely normal for him – the woman’s place is at home. The initial focus on Lora and Sonya gradually expanded to include more female characters such as their mother Anna (Katya Kazakova), their other aunt Joanna, who is queer, and their grandfather Yosif Sarchadzhiev.

The action takes place against the backdrop of loud protests against the ratification of the Istanbul Convention, aimed at combating domestic violence and violence against women in general. The film addresses issues facing women such as postpartum depression, gender discrimination and inequality.

“Women Do Cry is a burning indictment for Bulgaria’s attitude towards women,” Screen Daily wrote after the screening. The challenges and trauma of a family skillfully reflect a larger society enslaved to patriarchy, prejudice and blind faith. The film’s harsh, pulsating anger and some wonderful performances create an explosive drama that should win minds and hearts after its premiere in Special View. The personal and the political blend into a provocative, captivating story. “

The film is based on real events, the draft of the script, which won funding from the National Film Center, was written by Biliana Kazakova. Later it was further developed by Mileva and Vessela Kazakova, they are directors and producers of the film.

Women Do Cry represents an entire society through the stories of these women, continues Alan Hunter’s review in Screen Daily:

“Each new development helps the overall picture. This is a country where men behave like predators and think everything belongs to them.”

The critic also gives examples – Lora is sexually harassed at work, and in one of the most shocking scenes, a gynecologist refuses to examine Sonya after he understands her diagnosis. He denounced her as a degenerate slut and blamed the liberals for the state of the country. News headlines help the plot – protests in support of “traditional family” and “family values” are organized in Sofia, part of the society shares homophobic views, shocking statistics are reported on the radio, according to which 91% of women in Bulgaria are victims of rape from their partners or an acquaintance of theirs.

Women Do Cry leaves the feeling of a provocative battle cry rather than a lecture, the viewer is immersed in the family’s attempts to cope with their current problems and face the wounds of the past. Sonya’s story is especially heartbreaking – summarizes Hunter – Mileva and Kazakova manage to fit the content and style. Memorable is the scene in which Sonya and Lora sit on a pile of cobblestones and discuss their problems and those of an early stork, whose fate is like a red line through the plot.

The critic also draws attention to the acting, pointing out Ralitsa Stoyana and the strong difficult character of Lora, whose sharp frankness serves as a strong slap, as well as the exceptional Maria Bakalova capturing the horrors of a young life developing at the speed of a fast train.

In his second part, Women Do Cry falls into strange conventionality, says Diego Lehrer in the Spanish cinema blog Micropsia. There is a metaphor associated with an early stork that does not work very well and the intention to understand or even justify men’s behavior about events and traumas from the national past does not seem necessary or logical in terms of what the characters say . It is as if in these moments the film is trying to emphasize ideas and justify actions that should not be emphasized or justified.

But these are minor problems, the critic points out, this does not prevent this dignified, genuine and politically committed proposal from a country whose cinema we know little about.

Bulgaria lags behind in both filmmaking and international coverage, so viewers miss situations that are common to many Eastern European countries, but at the same time very specific and painful, Lehrer said.