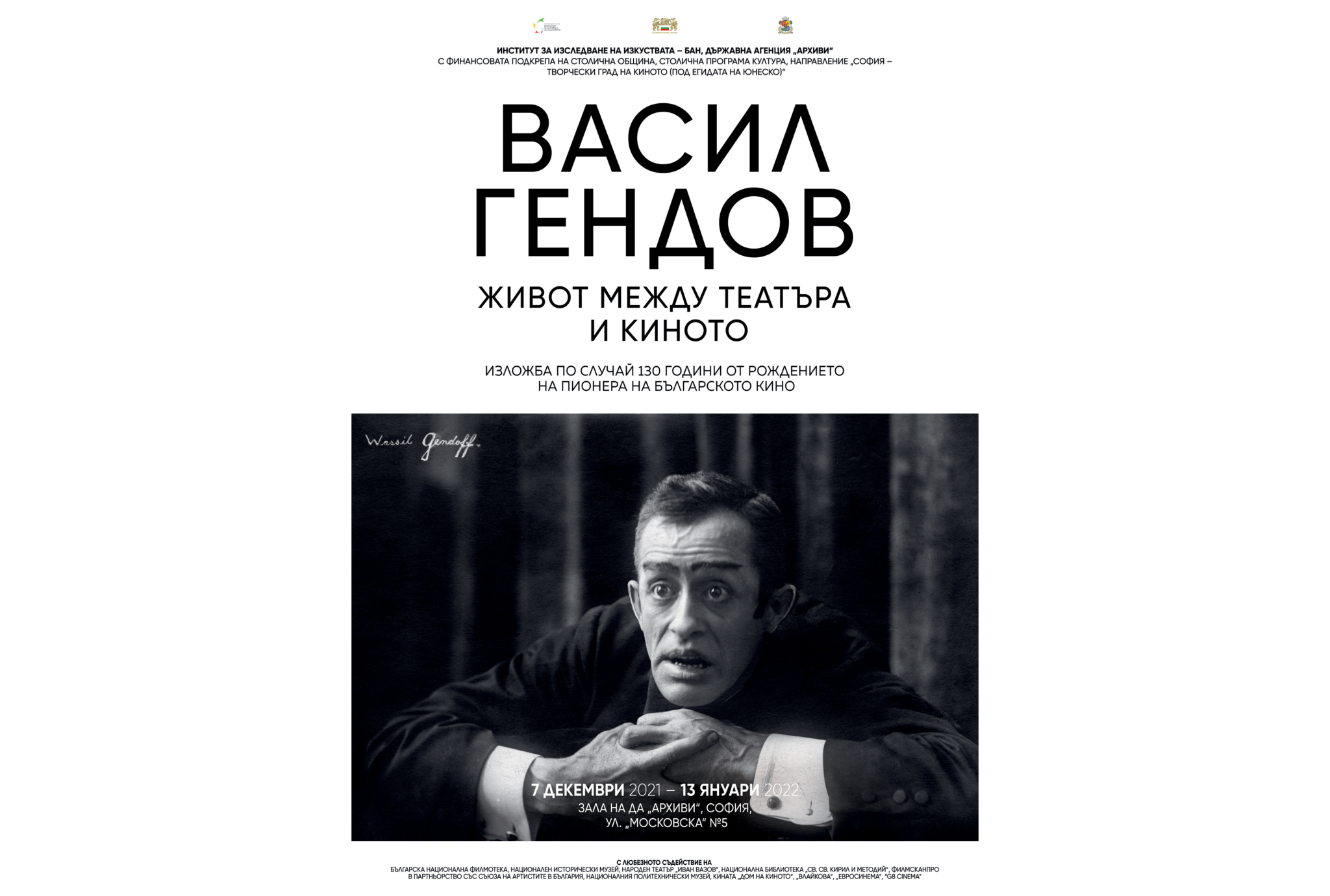 On December 7, 2021 in the Exhibition Hall “Archives” of DA “Archives” at 5 Moskovska Street was opened the exhibition “Vasil Gendov. Life between theater and cinema on the occasion of the 130th anniversary of the birth of the pioneer of Bulgarian cinema, carried out by the Institute for the Study of Arts – BAS and the State Archives Agency.

The exposition consists of 30 boards in the size of 70 x 100, dedicated to various topics from the biography and creative path of Vasil Gendov, and several dozen valuable exhibits and documents that have not left the museum and archive repositories. For the first time, a number of unknown facts about the pioneer of Bulgarian cinema are presented to the general public, as well as unprecedented photographs, documents from his personal archive submitted to the National History Museum and documents stored in the DA Archives.

The exhibition aims not only to pay tribute to one of the founders of Bulgarian film art, but also to bring contemporary audiences to the real dimensions of its importance and invaluable contribution to Bulgarian culture of the first half of the twentieth century. Among the documents shown for the first time in the exhibition are hitherto unknown manuscripts with the original plays and dramatizations of Vasil Gendov, which he wrote for his traveling theater troupe. Also on display is the oldest surviving Bulgarian film poster preserved in the State Archives, made for V. Gendov’s film “Bai Ganyo” (1922) – discovered during the preparation of the exhibition.

The exhibition was prepared by a research team of the Screen Arts Department of the Institute for the Study of Arts at the Bulgarian Academy of Sciences, headed by Assoc. Prof. Dr. Alexander Donev and with the participation of Ch. Assistant Professor Dr. Teodora Doncheva and Chief Assistant Professor Dr. Deyan Statulov. Scientific consultant of the project is Doctor of Arts Petar Kardzhilov. Kiril Kirilov (Chief Specialist) and Dimitar Stoimenov (Head of Department) in the Publicity of Archives Directorate at the State Archives Agency have made a significant contribution to the realization of the exhibition. The artist-designer of the exhibition is Daniel Nechev.

The project is implemented with the financial support of Sofia Municipality, Sofia Culture Program, Sofia – Creative City of Cinema (under the auspices of UNESCO) and with the kind assistance of the Bulgarian National Film Archive, National History Museum, Ivan Vazov National Theater, FilmskanPro in partnership with the Union of Artists in Bulgaria, the National Polytechnic Museum, the cinemas “House of Cinema”, “Vlaykova”, “Eurocinema”, “G8 Cinema”.

The exhibition “Vasil Gendov. Life between Theater and Cinema ”can be visited from December 7, 2021 to January 13, 2022 in the Exhibition Hall“ Archives ”of DA“ Archives ”at 5 Moskovska Street.