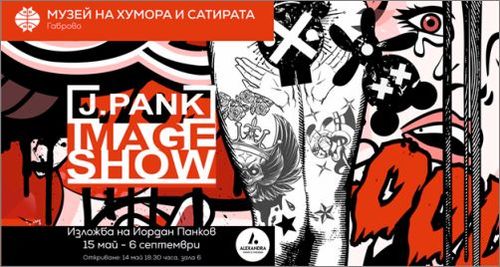 Plots of missing or stolen masterpieces of world art come to life in pop art interpretations in the exhibition J. P A N K / IMAGE SHOW at the Museum of Humor and Satire.

From May 14 to September 6, the Museum of Humor and Satire presents an exhibition of Gabrovo-born artist Yordan Pankov, better known as J. Pank. The works in J. PANK / IMAGE SHOW are from different periods – both new and paintings from the series “Fly-by”, “Lost” and “Yesterday and Today”, where the author interprets masterpieces of art history with the language of pop culture.

PANK focuses primarily on canvases that have disappeared. He admits that he is no less impressed by their market value than the recognizable images, and the multiplication and deliberate repetition on which his handwriting is based reinforce the feeling that everything today is a vision.

He is connected with the Museum of Humor not only by the emotional thread of his childhood, but also by his characteristic ironic handwriting. The sense of humor is part of the visual freshness of his images, as well as the artistically carefully nurtured automotive mythology. “Some would take my handwriting as a light style against the heavy artillery of classical art, but it is in demand, so I bring together distant in time and difficult to reconcile phenomena. I like to mix the conceptual approach with the audacity of pop art – it gives ease of perception, which easily takes art out of the gallery and brings it closer to real life, fashion and design, “said the author.

“We must be happy, despite a world where there is so much suffering,” insists J. Pank. “Art must first and foremost be human, comical when necessary and brutal when necessary.”

PANK is a pseudonym of the artist Yordan Pankov, born in 1966 in Gabrovo. He graduated from the National Academy of Arts. He lives in Sofia and works with plots from missing or stolen masterpieces of world art. His solo exhibitions are presented in the gallery “Raiko Alexiev” and the National Gallery, in the galleries “Arosita”, “Sofia-Press” and “Serdika”. He participated in five editions of the Gabrovo Biennale, as well as in three editions of the Triennial of Graphics in Varna.

“For the most part in my work, I use missing paintings by old masters as a starting point. My explanation is that works with a dramatic destiny become a media sensation, not only because of their artistic qualities, but also because of the provoked public interest after their disappearance. Thus they enter the sphere of mass culture. Maybe this multiplies the interest in them many times … Vermeer’s “Concert” may not be his greatest masterpiece, but it is the most expensive sought after and hence very popular painting … it is still valued at over $ 250,000,000. .. ”