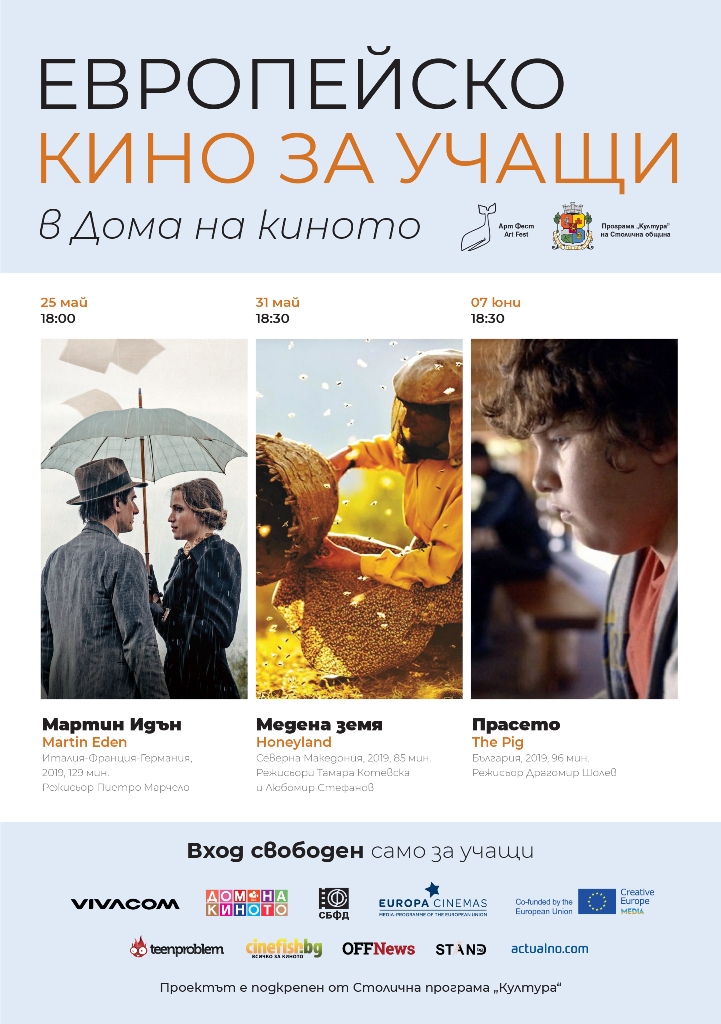 Admission is free for pupils and students

After the intriguing titles presented to the young audience as special highlights in the spring editions of the 25th Sofia Film Fest, the traditional educational program EUROPEAN CINEMA FOR STUDENTS at the Cinema House continues with three more titles until the end of the school year.

The screening of Martin Eden —  the first feature film of the famous Italian documentary filmmaker Pietro Marcello will start on May 25 (Tuesday) at 18:00. The work is a film adaptation of the eponymous semi-biographical classic of Jack London, which became one of the first bestsellers in the history of twentieth-century literature after its publication in 1909.

At the heart of the plot is the story of a genius misunderstood by society, who has many similarities with Jack London himself. They are both adventurers, eager to explore the world, self-taught and rejecting the culture of the rich class. The action of the film is transferred to Naples, where the poor and uneducated sailor Martin (played by Luca Marinelli, one of the stars of Italy and among the most sought after actors at the moment) experiences the rise and fall of his passionate love for the rich Elena (Jessica Cressy). Determined to make his dream of marrying her come true, Martin rushes to the books to raise his social status. He became a successful writer only after realizing the bitter truth that everyone around him was only interested in his fame and fortune…

Martin Eden premiered at the Venice Film Festival, where the film was nominated for a Golden Lion, and Luca Marinelli received the prestigious Coppa Volpi Award for Best Actor.

On May 31 (Monday) at 18:30 will be presented the film Honeyland by directors Tamara Kotevska and Lyubomir Stefanov – a real jewel from North Macedonia, which was nominated for an Oscar for international film and best feature film in 2020.

The work won the award for best foreign documentary in Sundance, and the story transports viewers to a desolate corner of Europe, where a woman cares for bee families – a reality quite different from the breathless everyday life of the 21st century high-tech… The film focuses on one of the last master beekeepers, Hatice Muradova – she and her elderly mother, bedridden, are the only inhabitants of the abandoned Macedonian village of Bekirlia. The two live primitively in a brick house, without electricity and running water, but in harmony with the world around them – half of the honey bees Hatice leaves for them in an effort to restore balance in the “honey land” until a large family settles in closeness. The film imperceptibly becomes an epic tale of the reckless exploitation of natural resources that has struck filmmakers and audiences around the world

The screening of The Pig by director Drago Sholev will start on June 7 (Monday) at 6:30 p.m. Launched as a project of Sofia Meetings, the film was premiered in the competition program of the 23rd Sofia Film Fest and was awarded the special prize of the international jury, the prize of the jury of FIPRESCI and the award for best Bulgarian feature film, awarded by the special jury of festival selectors.

The Pig tells the story of a thirteen-year-old boy nicknamed the Pig, subjected to daily bullying by his classmates. A lonely outsider, he is used to insults and does not retaliate. While one day, he instinctively strikes a single, perhaps fatal blow…

“It is important for me to tell the story of the Pig and the bullying children,” says director Drago Sholev. “I know that there is one such boy in each class. I know that we often make mistakes towards other children and that we can be very bad and cruel to them. I also know that at some point each of us can be the Pig. “

Already at the level of the project The Pig attracted the attention of producers in 2015, when it was presented at Sofia Meetings and won the Young Producer Award provided by YAPIMLAB (Turkey), then participated in the prestigious Torino Film Lab its project continues with the support of SEE Cinema Network and the National Film Center. In the fall of 2016, he also participated in the pitching forum of the So Independent festival and won the Danny Lerner Award from Nu Boyana Film Studios for best project.

The film has no state financial support for production – The Pig is produced entirely with private funds by the producers – the Bulgarian companies “Gorilla Film”, “New Boyana Film Studios”, B2Y, “Screening Properties” and “Papillon Film” (Romania).  It was implemented with the support of UNICEF.

All pupils and students can watch the films at the entrance FREE with an invitation from the box office of the House of Cinema. In connection with the reduced capacity, we ask for the understanding of all those wishing to attend.

The European Cinema for Students project is supported by the Culture Program of Sofia Municipality.