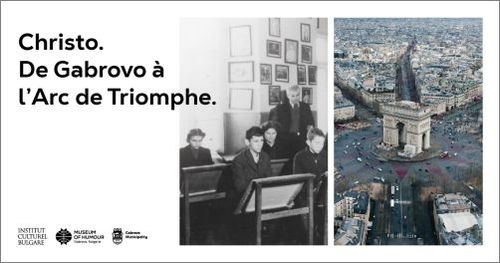 Documentary Exhibition on Christo Opens in September in Paris

30 rarely shown works of art, photographs and facsimiles, dedicated to the early years of the world artist of Bulgarian origin Hristo Yavashev, will be exhibited in the gallery of the Bulgarian Cultural Institute in Paris this fall. “Christo. From Gabrovo to the Triumphal Arch ”is a documentary exhibition that tells the story of the Yavashevi family, the earliest years of the child Christo and the first artistic performances of the young artist.

The event opens on September 16 this year. and it is a rare chance for the residents and guests of the city to peek into a part of the artist’s biography that the world knows little about – his “Bulgarian period”.

Among the exhibits are personal photos provided by family members, as well as documents from the Bulgarian State Archives and other institutions. Early works by Hristo Yavashev from his student years and dear memories from friends and classmates are shown. The exhibition traces the formation of Christo as one of the most recognizable artists-innovators in the art of the twentieth and twenty-first centuries, before at the age of 21 he took on the risky path of an emigrant artist beyond the Iron Curtain.

“Christo. From Gabrovo to the Arc de Triomphe ”is a joint initiative of the Museum of Humor and Satire and the Bulgarian Cultural Institute in Paris with the support of the Municipality of Gabrovo and the Ministry of Culture. The exhibition is dedicated to the long-awaited and postponed in 2020 implementation of the artist’s project for the packaging of the Arc de Triomphe this year in the French capital.

The exhibition will be presented in the gallery of the Institute from September 17 to November 30, 2021. It is an adaptation of the project “Born in Gabrovo”, realized in Gabrovo in 2017 and in Sofia in 2019.

“Christo. From Gabrovo to the Arc de Triomphe is part of the initiatives for the establishment of the Christo and Jean-Claude Center for Contemporary Art in Christo’s hometown, Gabrovo. At the beginning of the year, it was decided to house him in the building of the former Textile College.