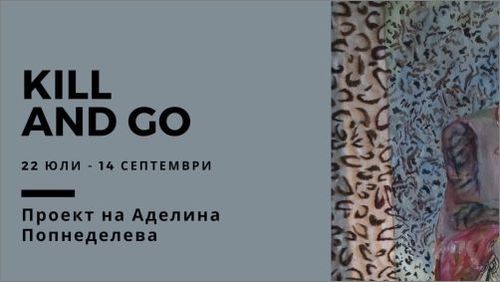 Design has become a “magic” word that has long since transferred the meaning associated with its origin and initial development. From the process of designing and replicating (thanks to the possibilities of technology) functional objects to the sign of the times and even the “temple of the soul”.

The social, even socialist idea that, thanks to technical progress, everyone will have access to beautiful and functional objects in everyday life has become a sign of the surface and the superficial in the literal sense. Identifying with a prestigious brand (which is by no means available to everyone) in a literal and figurative sense, with the new fashion turns out to be the most important thing in the modern world, ignoring any other meanings. We see how design, like other postmodern phenomena, denies itself.

In “Kill and go”, 75/75 cm, painting and embroidery, 2021, Adelina Popnedeleva combines on the one hand various techniques that can be defined as exquisite / applied (an ornament that is painted, but also made with illusory real materials). There is also a union on the basis of male / female media (painting, for centuries it is a territory reserved for male artists, while embroidery is considered a female occupation). The ornament is “leopard spots”, which should confirm the thesis that man, as the highest creature, controls nature. And this is noted on the body. The sign on the body from ancient times indicates belonging to a particular group, as well as status, place in a structure.

On the other hand, the ornament “leopard spots” has an important place in Buddhism. The Buddhist treasure is threefold: the Buddha himself, his dharma teachings, and those who follow his teachings. These three treasures become an important motif. They are depicted as three circles and three wavy lines and are known as the lips / eyes of the Buddha. In textiles and embroidery they are associated mainly with the imperial court. They are called “leopard spots” and “tiger stripes” and mean strength. The whole wall 140/290 cm will be with photo wallpaper or self-adhesive foil with this motif.

On the other hand, in his famous article “Ornament is a Crime,” Adolf Loos, an architect and theorist of modern architecture, states, “The modern man who gets a tattoo is a criminal or a degenerate. There are prisons where eighty percent of prisoners get tattoos. Tattoos who are not in prison are latent criminals or degenerate aristocrats. When a tattooed person dies at large, he dies only a few years before committing the murder.

Adelina Popnedeleva’s work raises the question of whether the sign really loses its meaning and becomes an innocent decoration or continues to have a provocative and stimulating behavior force?