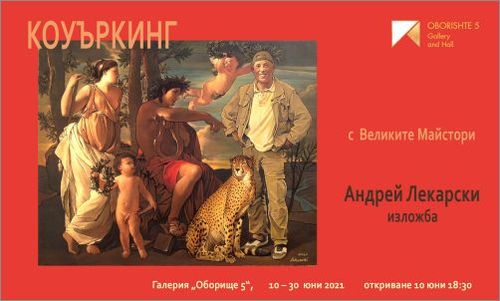 “Coworking with the Great Masters” — Exhibition by Andrei Lekarski

“If there is anything attractive in Andrei Lekarski’s work, it is that he does not look at them deadly seriously, but offers us a game of imagination with objects found along the way. These objects have fallen out of the man’s cart and only one child would collect them and play with them, arranging and polishing them constantly, giving them a new shine and a new sound! ”, With these words the late literary genius Yordan Radichkov seems to be the most precisely defines the artistic style and search of the native of Sofia, but found recognition and directions in Paris, artist Andrei Lekarski.

His current exhibition “Coworking with the Great Masters” moves in the author’s hyper-realism, provoked by his endless respect and inspiration from the classics of fine arts. It is no coincidence that the title of the exhibition (which from June 10 to 30 presents the Sofia gallery “Oborishte 5”), which encodes the main artistic references of the artist to favorite artists and works. The visual provocation, so characteristic of Andrei Lekarski’s paintings, moves in many directions, but the stable base is provided by the “giants on whose shoulders” the author steps. The famous catchphrase “Stepping on the shoulders of giants”, in which humanity or rather its artistic part has been looking for centuries, referring to the invaluable value of the achievements already stated in the direction of art and science, is boldly interpreted by the artist who discovers his idols. – Dürer and Holbein decades ago, when he was a student at the Surikov High School of Art in Moscow. He presented his first solo exhibition in Mexico in 1970, and in 1978 the Museum of Modern Art in Paris bought his painting “Katya in Wonderland”. A trademark of Andrei Lekarski is the compilation of realities, which often includes members of his family, as well as his favorite cars and motorcycles.

Autobiographical moments are again skillfully woven into the interpretation of masterpieces of fine art, in which the author creates a unique dialogue, closed or rather open in the infinite space of the picture frame.

Combined in the provocative title “Coworking with the Classics”, the 25 works of art interpret in an original way the characteristic play of Andrei Lekarski (the same one that Yordan Radichkov defines as “a child’s play”) with the legacy of the titans in the fine arts. The intersections of realities, those of masterpieces created centuries ago, as well as the personal moments and characters from the author’s life, so skillfully woven into the visual narrative, are like a galactic map in which time and space are infinite. “I have always insisted on the first contact with the picture, on the direct, shock perception, ie. the viewer who is in front of my work at the moment has to be convinced that this scene is almost true. This is a fairy-tale, unreal world in which he can also become an accomplice, “the artist commented in a conversation with Professor Aksenia Dzhurova.

Critics call him the “Knight of the Imagination” and for good reason – the elegance and respect with which he approaches the masterpieces of fine art, which inspired him for artistic dialogue, add a sense of aristocracy. At the same time, true to his style as an artist, Andrei Lekarski leaves a distance in which the viewer can adjust his own feelings to this provocative communication. The main state of the true artist is the immense freedom to stand on the shoulders of the giants to see further, but also to build on their achievements and traces. And this Andrei Lekarski masters to perfection, which determines his drawing, as well as his artistic madness to face the great masters.