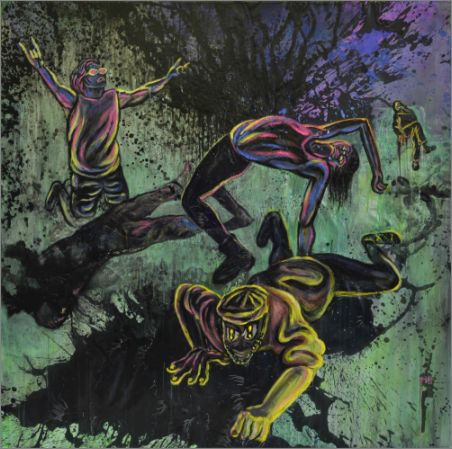 Sariev Gallery, Plovdiv presents the solo exhibition of Martina Vacheva – Circle Pit, showing the latest series of works by the author from 2020 and 2021 in an interconnected installation.

Even with her early works, with which she gained popularity, Martina Vacheva built a highly recognizable visual language, character system and plots. A language that attaches importance to traditions, pop culture and the social context as they are, as they want to be. These works skillfully set a specific artistic position, mixing a tempting mixture of humanity and grotesque. The colors are fresh and bright, the eyes of the characters are open, hopeful, moist with joy and wonder.

Martina’s new works from 2020-2021 clearly show a change. The lights are turned off, familiar faces from previous paintings sneak in, but the stars of pop culture and the characters from the myths are missing. The characters are depersonalized or more precisely the characters are depersonalized, they are in a general wave, they are the wave, they are in transformation, going out of the frame and immersed in the subconscious. Ghosts of the image, seeking realization between their beginning and end, which are now in one. They live in the chthonic world of their euphoric fainting, of music, of the whirlwind, of passion, and before a duel they provoke the limits of other rules. We wonder if they still have idols? Or the gods they want to be are already in sunset.

The key picture for the exhibition “Splash” presents the typical for rock concerts jumping of the musician from the stage in the audience, known as stage dive or slam. The rock singer was left alone with his existential urge to throw into the unknown He throws himself, but here, in this hesitation, for the first time in Martina Vacheva’s works, a flood appears. and ecstasy, a liberating gesture that leaves room for remembrance, or rather a place for a totally new reality, whatever it is now, it will never be portrayed as before.

As picturesque gestures the flooding, as well as the switching off of the lights, are brutal, they take over the other pictures of the cycle. Excessive runoff is cloudy, black, blue, yellow. It replaces the social context that until recently defined the characters (“Glammy Stirious”, 2021); it is a personal aura, unshared but gifted to all ecstasy (“Cannonballs twist”, 2021); it stems from the prolonged, self-forgetful spray on the face of the modern gorgon (“Burn Out”, 2021); it is the sound that will blow the speaker (“Bottle of Lost”, 2021); spills over the two paintings from the diptych, in which the musician says goodbye to his audience in the hope that something will bring them together (diptych, 2021); it is also the withered flaw of the erupted potential, of our own intoxicating uncertainty, on which we step, hoping to continue (Cannonballs twist, 2021).

And here, in this cycle of work, against the background of dim lights and spills, things happen that are seemingly amusing, but bring a sense of war with the applied remnants of confetti, the burning of the canvas, the dismantling frames. There is a painful reluctance to leave the territory and a frantic instinct to continue the ritual as a protected area of ​​self-expression. Self-expression, which is clearly self-consuming, becomes narrow and intolerant, being in constant ecstasy between the limit and security.

We wonder if these characters are fleeing into the unknown as a promise to reach the infinite, is that enough? What will continue in this death race ?

The extreme power of this carnal exhibition, populated by melancholy, powerful figures, dim light, strong textures, the sound of an ominous decadent carnival, is not just the courage to put an end to yourself and those who seemingly “are” in your midst, but and to believe that there is something beyond that gathers in another, albeit invisible way, something that magically moves the circle pit, which has magically appeared in the dense crowd, which is not just our divine comedy.