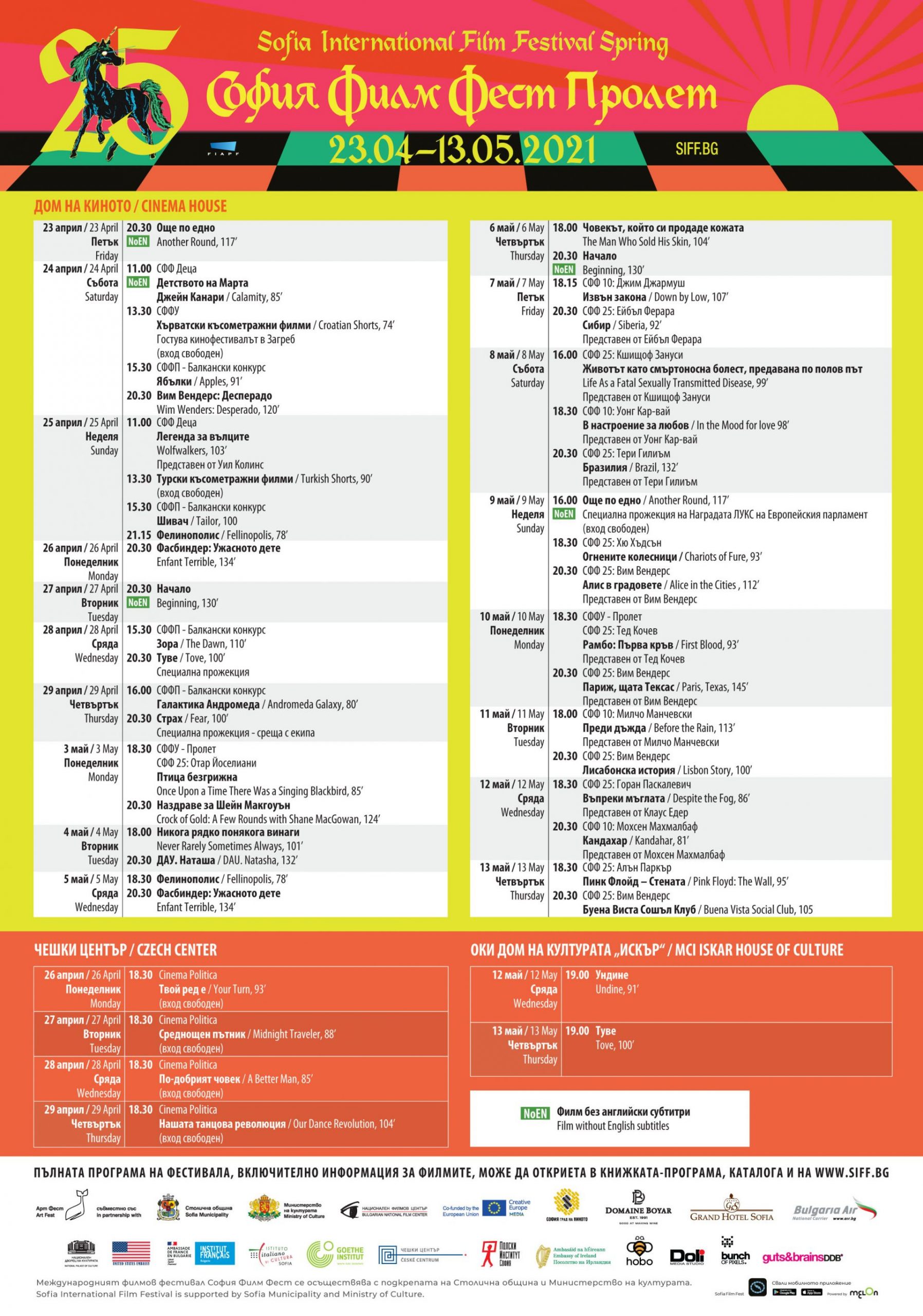 For movie buffs, there are three weeks ahead, in which the spring holidays will be combined with cinematic pleasures, which are hard to resist. Remastered versions of classic works and new hit movies from the world and Balkan cinema will be presented in the program of the 25th Sofia Film Fest # Spring, which starts on FRIDAY!

You have the opportunity to see Mads Mickelsen in Thomas Winterberg’s latest hit Another Round on the big screen – this could happen on April 23, days before the film is most likely to win an Oscar 2021 for Best International Film.

“Our ambition was to make a film about living. For the lost, inspiration, curiosity, a desire to take risks and explore the unknown. These four teachers just find themselves in a vicious circle of constant repetition and daily routine,” Winterberg said.

One of the Bulgarian films that the 25th Sofia Film Fest presents to the native audience is Ivaylo Hristov’s latest film Fear. This is a story of tolerance and humanity, of alienation, but also of the need for intimacy, of prejudice caused by fear of the different – this story is both sad and funny. The film was awarded the Grand Prix in Tallinn and four prizes, including the Grand Prize, at the Golden Rose Festival in Varna. The director himself describes his film as a harsh love story and even as an “absurd comedy” and says he called it Fear because it’s the feeling we have for people we don’t know. Fear will be presented at a special screening at the Cinema House by the creative team behind it.

The story in the Oscar-nominated The Man Who Sold His Skin by director Kaouther Ben Hania is about the journey of a young, sensitive and impulsive Syrian through Europe. To escape the war and live with the love of his life, he agrees to have one of the brightest modern artists tattoo his back. The film, starring the magnetic Monica Bellucci, received the award for best actor in the program “Horizons”, Venice 2020.

The special programs “SFF 25” and “SFF 10”, which include iconic films from the recent past of world-famous directors, contain digitally remastered copies that can be seen ONLY on the big screen.

Wong Kar-wai – In the Mood for Love;

Milcho Manchevski – Before the rain;

Goran Paskalevich – Despite the Fog;

The Finnish-Swedish co-production Tove by director Zayda Bergrot recreates part of the intriguing destiny of the artist Tove Jansson, creator of the famous mumintrols.

The premiere of Christian Petzold’s latest film Undine was in Berlin in 2020, and the charming Paula Beer was awarded the “Silver Bear” for Best Actress. Undine is a historian and works as a museum guide in Berlin. She not only knows everything about the Humboldt Forum, but also experiences a dramatic love story.

We offer these two films to the attention of movie buffs in the special festival screenings at CCI “Iskar”.

In the Czech Center from April 26 to 29 you can see four works from the special program with documentaries CINEMA POLITICA, presented personally by the selector and creator of this program Svetla Turnin, as well as their authors, thanks to the world wide web.

EXPECT more cinema from the 25th Sofia Film Fest in the fall!

With it you can watch screenings from Sofia Film Fest Spring or Autumn, or a film from selected screenings at the Cinema House until the end of 2021!

Sofia Film Fest is realized with the support of Sofia Municipality.