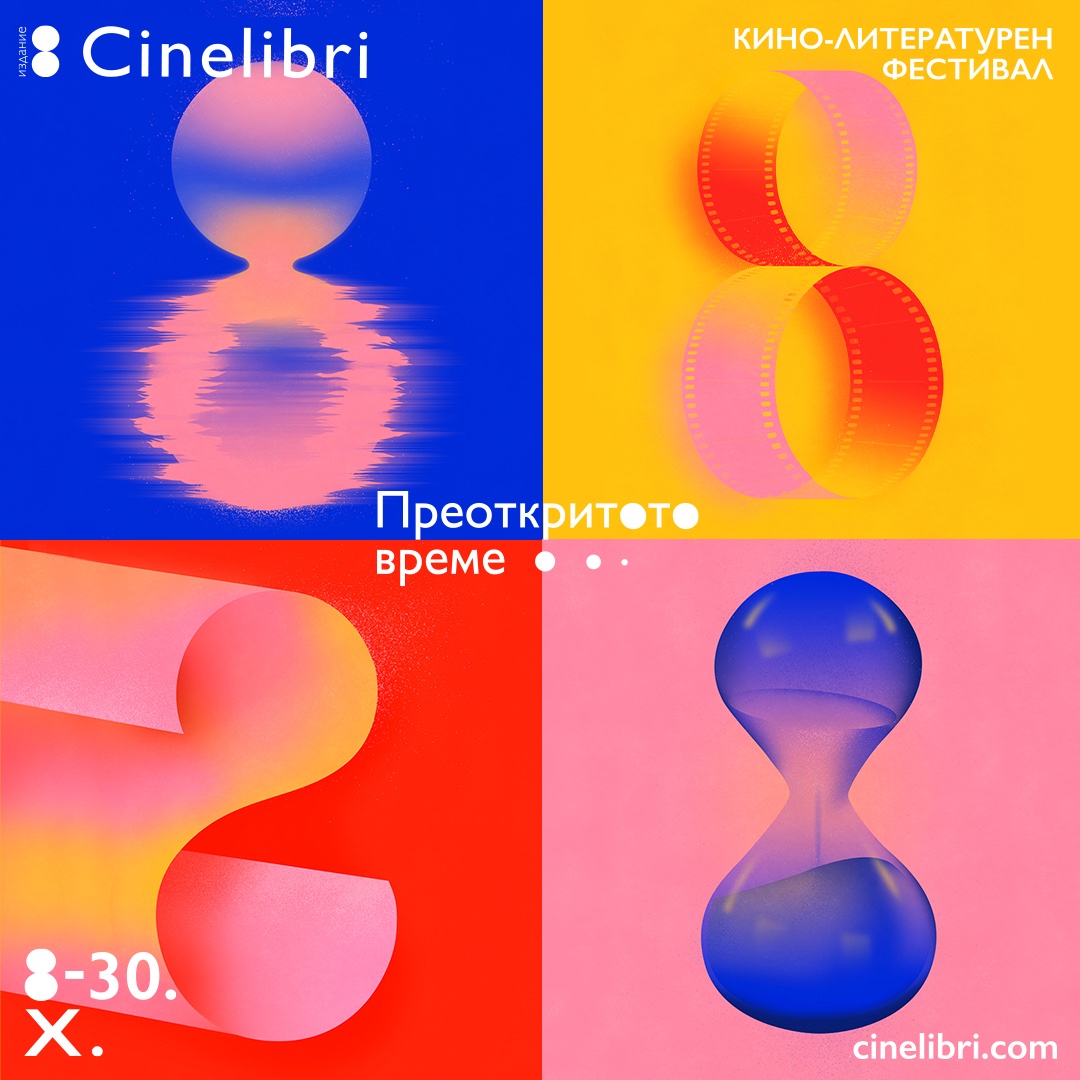 Cinelibri 2022 will be held under the motto “Time Rediscovered”

Introducing the concept and key vision of this year’s edition of the International Film and Literature Festival Cinelibri! The author’s interpretation of the idea of time and the timeless messages of cinema and literature is the work of Radoslava Boor and Slava Studio.
The motto “Time Rediscovered” marks the 100th anniversary of the death of Marcel Proust, one of the icons of literary modernism, author of the monumental novel “On the Trail of Lost Time”. “Time Rediscovered” is the title of the seventh and final volume of this verbal cathedral, where the hero’s tormented thoughts and insomniacs find refuge in the creative process, the only antidote to the irreversibly one-way passage of time.

The four readings of the subjective sense of time are integrated into an overall vision in which the sign of infinity stands out, coinciding with the number 8 and the number of the festival edition. This sign is also a powerful reference to the infinite and unceasing creative energy that great writers harness, creating imaginary worlds whose projections we seek and sometimes find in reality. In Marcel Proust, for example, the boundary between life and literature is blurred, which is why the first vision depicts the white leaf, the symbol of every primordial beginning.

The idea of “captured time” is inspired by the work and philosophical insights of director Andrei Tarkovsky. For the great cinema masterfully manipulates time and deftly captures it on celluloid film: “The man who goes to the cinema goes there for time: the time he has lost or missed, or for the time he has not found.” This is the second dimension of the festival’s key vision, expressed symbolically with a filmstrip.

On the other hand, the hourglass symbolizes the overwhelming ephemerality, the “lightness of being”. Time, like the sand, slips through our fingers before we have had our fill of the moment… Proust himself reminds us how often we sacrifice possible happiness, giving in to our impatience to satisfy our momentary urge. This is where the idea comes in, that it is this fleetingness, this limited possibility of happiness, that enhances its value.

The fourth dimension sees cosmic time, the most infinite, yet even the angle of the falling rays of a setting or rising sun is able to fix the moment and give it the fairy-tale symbol of a reality experienced at a particular time.

Through this complex vision, the festival defends the idea that the beauty and perfection of a work of art or an intellectual achievement cannot lose its value over time. Creativity helps us to get closer to the other, to understand what he sees of this universe, which – without its artists, thinkers and inventors – would be as unknown as the lunar landscapes. Thanks to art, the only world we know multiplies before our eyes into as many worlds as there are original creators, worlds that are more different from each other even than the planets rolling into infinity.

All these ideas will be embodied in a rich programme, uncompromising in quality, crowned by the opening ceremony on 8 October in Hall 1 of the National Palace of Culture and promising 23 days of cinematic and literary timelessness, bringing together the 60 best film adaptations of the past year!

The eighth edition of the International Film-Literary Festival Sinellibri will take place between 8-30 October in Sofia and six other cities in Bulgaria. The program will be realized with the support of Sofia Municipality, National Film Center, the respective municipalities and the assistance of numerous partners and supporters to be announced. The festival is part of the Sofia Municipality’s Cultural Events Calendar for 2022.