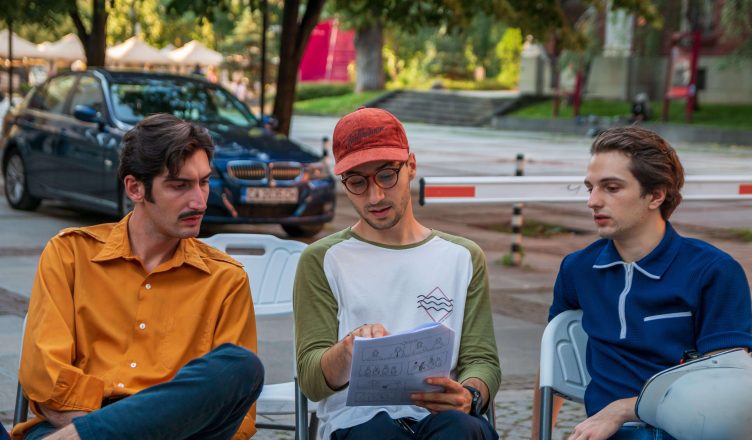 Chris Zahariev and Dessy Tenekedjieva with a New Film at Cannes

In 2001, Dessy Tenekedjieva and Hristo Zhivkov made a real boom on the red carpet at the Cannes Film Festival and appeared in all world cinemas. With their roles of Giovanni Bandenere and Maria Medici in The Profession of Arms by Italian film legend Ermanno Olmi, they became the only Bulgarian actors to represent our country at the most prestigious film festival in the world, with a film from the Official Selection of the most important program – Competition. , in which only 20 films from around the world fight for the dream Palme d’Or every year. The success of the native actors is still unsurpassed and remains in golden letters in our cinema history.

Now, exactly 20 years later Dessy Tenekedjieva returns to where she was discovered for the big cinema, but this time as a producer of the inspiring film director and vlogger Chris Zahariev. The exciting news is that his graduation film An Elevator Distance has been selected in the international panorama “Short Film Corner” at the Cannes Film Festival 2021! The short film forum, part of the dreams of all film festivals, gives voice to young and promising filmmakers through screenings, meetings with producers, distributors and directors from around the world. With this selection “An Elevator Distance becomes part of the elite catalog of the festival, which will be held between 10 and 16 July this year.

But that’s not all. A few days after its premiere in Cannes, the film enters the Official Competition Selection of the Sarajevo Youth Film Festival, one of the largest youth film forums in the world. An Elevator Distance is the only Bulgarian representative in Sarajevo this year, and for the Grand Prix it will compete with film productions from 7 European countries. The award ceremony will take place on July 24th in the heart of Sarajevo.

According to Chris Zahariev, his film “in a sympathetic way asks very serious moral questions, through the eyes of two young people who are looking for their place in the world of adults.”

An Elevator Distance is a 27-minute crime comedy about two young police officers (the discoveries of the film Alexander Georgiev and Ioan Popov), forced due to amusing circumstances to conduct their first “professional” investigation. A lotto ticket of their rich landlady (played by the dignified Yordanka Kuzmanova) was stolen, and all the neighbors in the cooperative (Pavel Poppandov, Eleonora Ivanova, Georgi Karkelanov, Lili Geleva) are suspected. The screenwriter of the film is Pavla Kotova, whose last film Tanda received a nomination for the Student Oscars 2020.

Last year, Chris Zahariev won the cult award for Flight in Art of the Stoyan Kambarev Foundation. This was also the reason for Desi Tenekedjieva to become a producer of his diploma film Elevator Distance, which is a co-production between her company NOVA film and NATFA, led by Prof. Dr. Stanislav Semerdzhiev.

“I am very happy for Chris! I love this boy! It is wonderful when talent is combined with creativity, intellect, professionalism and ambition. Then dreams have no limit! Chris is working on the film with a lot of passion, along with the whole wonderful team – all young and very talented filmmakers. Thanks to everyone, led by the great actors and especially to Yordanka Kuzmanova and Pavel Poppandov, who accepted our invitation, despite the limited budget. The movie is great! Meaningful, extremely entertaining, presented with moderation, sense and surprising maturity for a film director only 23 years old. I stand firmly behind all the new film projects of Chris Zahariev and I am convinced that a number of world film festivals await him. Sarajevo and Cannes are only the first. I hope to return to the Cote d’Azur with his debut feature film, which will follow the remarkable breakthrough of Kamen Kalev (Winner of the First Prize for Flight in Art) and my dear Mina Mileva and Vessela Kazakova and their film-cause Women Do Cry – shared Desi Tenekedjieva.

The film of the director’s duo was selected in Cannes in the second most important official competition program, namely “Special Look”! The film also features Oscar-nominated native Hollywood star Maria Bakalova. The directorial duo Mileva-Kazakova has already had serious festival successes, both with her feature debut Cat in the Wall and with her two daring documentaries Uncle Tony, The Three Fools and DS and The Beast is Still Alive, in which Desi Tenekedjieva is a co-producer. This is a sufficient occasion for Dessy, in the company of Chris Zahariev, to attend the world premiere and this film of theirs and to support her close friends in this exciting moment.