Bulgarian Actor is a Finalist in the Smithsonian Photo Contest

Photos of Vladimir Karamazov were nominated for an award by the Smithsonian magazine. With two shots, the actor is among the finalists in the categories “People” and “Nature”. Participation in the competition is free and open to a huge number of applicants.

The competition jury selects ten finalists for each of the six categories. The shots are arranged on a special site where the audience can cast their vote and pick the “The Audience’ Choice”. In the end, the jury announces a winner in each category and one winner of the grand prize, which is equal to 2,500 dollars. The winners in the individual categories and the choice of the audience receive $ 500. All 8 awards will be announced in the spring of 2021.

The shot with which the actor from the National Theater will compete in the category “People” is entitled “The Boy from the Mountain” and the main character in it is the little Yusuf from a Rhodope village.

“This is a great thing for me, because I want to show the world our country with its good things and positive examples. Now the world will see Yusuf and read the short story about him. Being a finalist in this competition is a huge reward for me, but if Yusuf wins, it will be a very big achievement. I told the boy the news and he was very happy. As of today, in the village of Krastava in the Rhodopes, they have a new little star named Yusuf! ”, says Karamazov.

The second photo, called “Goodbye, Family”, is of several snails taken during the lockdown. When Karamazov noticed them, they were almost dead, so he sprayed them with water. Only one of them survived and moved on. The idea that popped into his head as he watched the snail’s path is that during the pandemic, dozens of people did the same – they moved on, even though they left loved ones, family and friends behind. 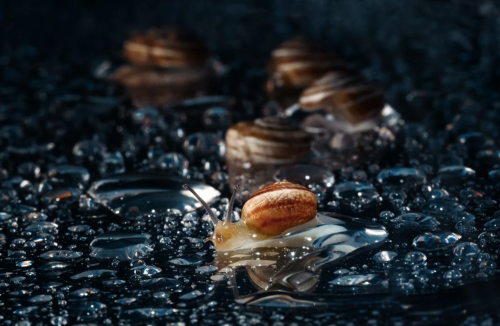