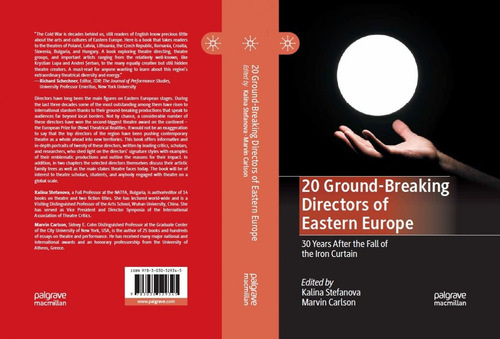 Book by Prof. Kalina Stefanova Introduces the English-speaking World to the Achievements of Directors from Eastern Europe

The prestigious Palgrave Macmillan has published the book “20 Ground-Breaking Directors of Eastern Europe”. It is the work of Kalina Stefanova (Prof. Dr. from NATFA) in co-authorship, compilation and editing with Marvin Carlson (Professor at the City University of New York). The book is in English and presents directors from Eastern Europe (30 years after the Iron Curtain).

“Richard Scheckner,” says Prof. Stefanova, “from whom we have a ‘quality stamp’ on the cover, is the greatest possible luminary in the theater as a theorist and a very revolutionary director-experimenter since the 1960s.” I worked with him for two years at New York University.

The book is also the first of its kind – for Eastern European directors, about whom very little is known in the English-speaking world. Marvin Carlson and I are colleagues in the editorial board of the magazine of the Shanghai Theater Academy, and there I actually offered him to make the book, “she added.

In the program “12 + 3” on BNR Prof. Stefanova shares that the described directors expand the territory of the theater in unexpected directions, change the face of the world theater and thus form the spiritual world of people today.

The first presentation of “20 Ground-Breaking Directors of Eastern Europe” took place online in Gdansk – as part of the Between Festival. The publication has been purchased from libraries around the world – from New Zealand to Canada and the United States, through Vietnam, South Africa, Europe. The English text of the book is to be translated into Chinese.

Prof. Dr. Kalina Stefanova is a lecturer at NATFA “Kr. Sarafov ”. Author (compiler and co-author) of 15 books on theater and criticism. Five of them are in English, with premieres in New York, London and Wroclaw, included in the required and recommended literature at universities around the world. He is the compiler / editor of the first anthology of Eastern European drama in Chinese in two volumes, the first book of Chinese plays in Bulgarian and the first performance of the Bulgarian theater in English.

For two terms he was Vice President of the International Association of Theater Critics (2001-2006) and Director of Symposia of the Association (2006-2010). He is a member of the editorial boards of magazines in China, USA, Romania, Croatia. He regularly works as an expert evaluator at the European Commission. Since 2017, he has been on the expert board of the world’s first theater city, Yue Opera Town, China.

Newer PostSofia Film Fest in Varna — Music, Cinema and Wine under the Starry Sky
Older Post Selected films from the Cannes Film Festival will be Shown at Cinelibri 2021