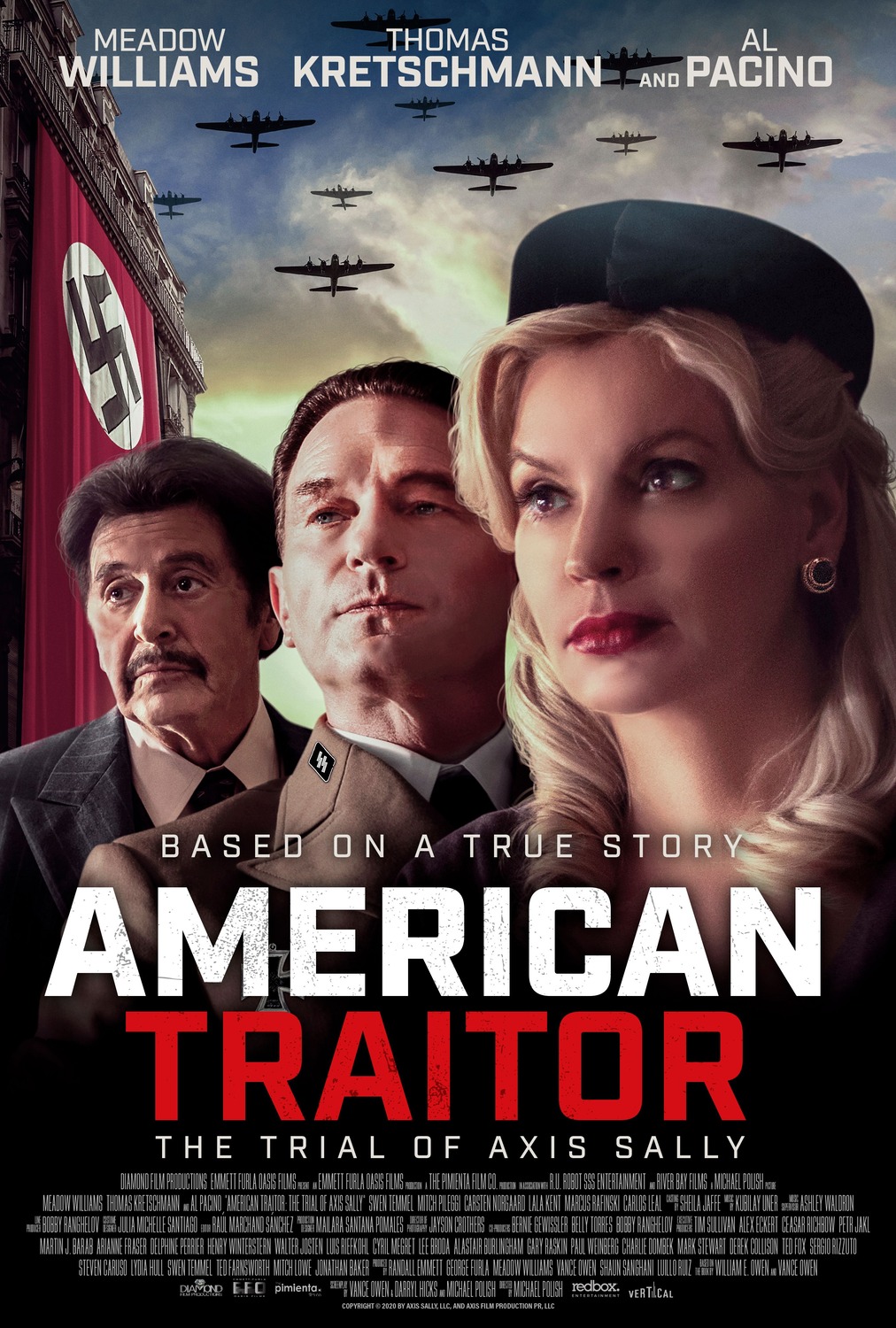 American Traitor: The Trial of Axis Sally with Al Pacino and Meadow Williams

We will always defend the (unpopular) opinion that going back to the past is more than useful. No matter what period of time we try to rethink through art, images are a powerful tool for learning, but also for reflection. A few days ago we came across the trailer for American Traitor: The Trial of Axis Sally, and the film promises to recreate the story of a famous real World War II character – Mildred Gillers. Known for her radio broadcasts from Berlin and the nickname Axis Sally, she became part of German propaganda immediately after the United States became involved in the war.

In 1946, Sally was captured by US counterintelligence and a trial awaited her at home – the charge was, of course, treason. Although her radio broadcasts have even been described as “apolitical,” the messages are intended to discourage American soldiers in Europe and North America by reminding them of images from home and painting images of their lone loved ones across the ocean. American Traitor: The Trial of Axis Sally, in which we will see Al Pacino as the lawyer of the notorious “Sally”, focuses on the trial against Gillers and the way in which a verdict is reached.

Al Pacino seems to be back in action. Despite the years that inevitably begin to feel heavy on him at a time when an actor finds himself in a graceful role, he is able to devote a significant amount of energy in improving the image entrusted to him. We see that his performance will be important and would attract the audience to American Traitor” – his role is played by James Laughlin, a lawyer who insists on an honest hearing of arguments and counter-arguments and in the meantime tries to transform public opinion. Meadow Williams, who the audience may remember from Apollo 13 and The Mask, was entrusted with the role of the seductive Sally, and in the other roles are Mitch Pileggi, Thomas Kretschman, Lala Kent and others.

American Traitor: The Trial of Axis Sally is directed by Michael Polish, who wrote the screenplay for Vance Owen and Daryl Hicks, based on Owen’s novel. And because it’s important to know the past, especially through images masterfully constructed by experienced actors, it’s an honor for the industry that, despite the small prospect of a return on budget, such films are still being made. It is clear – in this case the bets are collected by Mr. Pacino.

The premiere of. American Traitor: The Trial of Axis Sally in the United States to be on May 28, 2021, in selected theaters and on VoD channels. We will be interested to know the impressions of the American audience.

Newer PostTwilight of the Dead will be the Last Film in the Zombie Series of George A. Romero
Older Post First Teaser Trailer for Dexter’s 9th Season with Michael C. Hall