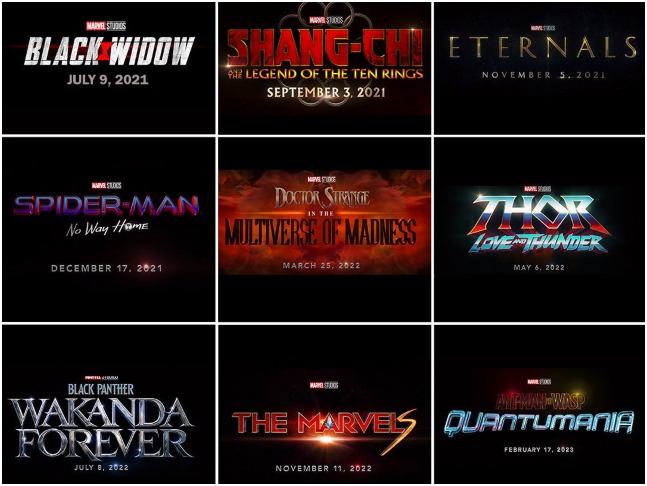 We are fast approaching our final (hopefully) return to theaters and our regular presence, which means it’s time for Marvel movies again. And since Marvel itself is certainly not happy about the fact that they had to delay their entire carefully designed program by a whole year, they have now launched an advertising campaign to remind the audience that there is still much to see from the universe, after the “finale” with Avengers: Endgame.

Marvel has released a video of their upcoming titles, perfectly created to restore people’s enthusiasm – first pays tribute to what was before, reminds us of the triumphs we experienced while watching the previous phases, even quite unexpectedly released a video shot inside a movie theater showing the audience’s reaction to the most inspiring seconds of Endgame. Then the initial credits begin and we see commercials for the upcoming film, as well as the titles and premiere dates of all the other parts of Phase 4, plus a tease for further plans.

See it now and then we’ll discuss it in detail:

As usual, Marvel shows that they not only know how to use our emotions to get to us again, but in fact that they understand the true love that the audience feels for this universe and that they will try to respect it in the future. It is quite understandable that we first see footage from The Black Widow, which has a negligible amount of time left until its premiere. Then come a few new shots from Shang-Chi and the Legend of the Ten Rings, but most importantly – we see the first shots from the upcoming The Eternals by Chloe Zhao. A few seconds of this project show us the first-class cast of the film, led by Angelina Jolie, Salma Hayek and Richard Madden, as well as Kumail Nanjiani with his action physics, which we have known for a long time, but for the first time we have the opportunity to see in action.

At the end of 2021 comes the third Spider-Man: No Way Home, from which there are still no footage, and then there are the announcements of the upcoming curious sequels of the stories about Dr. Strange, Captain Marvel and Thor. We like that Marvel has apparently decided not to use many titles with numbers that are “Hero 2” and “Hero 3”, with the only exception being Guardians of the Galaxy, all others get unique subheadings.

We will certainly be mostly interested in Thor: Love and Thunder when its premiere date approaches, and we are also curious about Black Panther: Wakanda Forever, about which talks have already begun to come out of the cast although the loss of Chadwick Boseman was insurmountable and returning to the set was not easy for anyone, they are hopeful of the direction in which Ryan Kugler will continue the story of Wakanda and pay tribute to one of the most popular characters of recent years.

It is also interesting that the second film about Captain Marvel was renamed “The Marvels”, which suggests that we will see her team up not only with Monica Rambo, who was presented to us in Wandavision, but also with the little one. Miss Marvel, with whom we are about to meet in her Disney + series.

Finally, a tease appears in the trailer, disguised as a simple number, indicating that this is Phase 4 of the MCU, but it is immediately apparent that the four is styled specifically as the one used by the Fantastic Four – one of the most the popular characters of Marvel Comics, who, however, have so far not received a proper film. We are sure that in the hands of Kevin Feig and the director John Watts, they will get their best screen incarnation so far.

It is also interesting to note that although it has already been announced that a new Captain America film ​​is being worked on, since we now officially have a new character with this name, it is actually gratifying to know that he will not move forward faster, and will give it the same attention and time they give to all their long-planned films.

Below you can see the full list of titles and their new release dates. And from now on we can only keep our fingers crossed that this new Phase of MCU development will bring us really different films, more non-standard and bolder, rewarding, but also changing the foundation we already have.

Shang-Chi and the Legend of the Ten Rings(September 3, 2021)

Doctor Strange and the Multiverse of Madness (March 25, 2022)