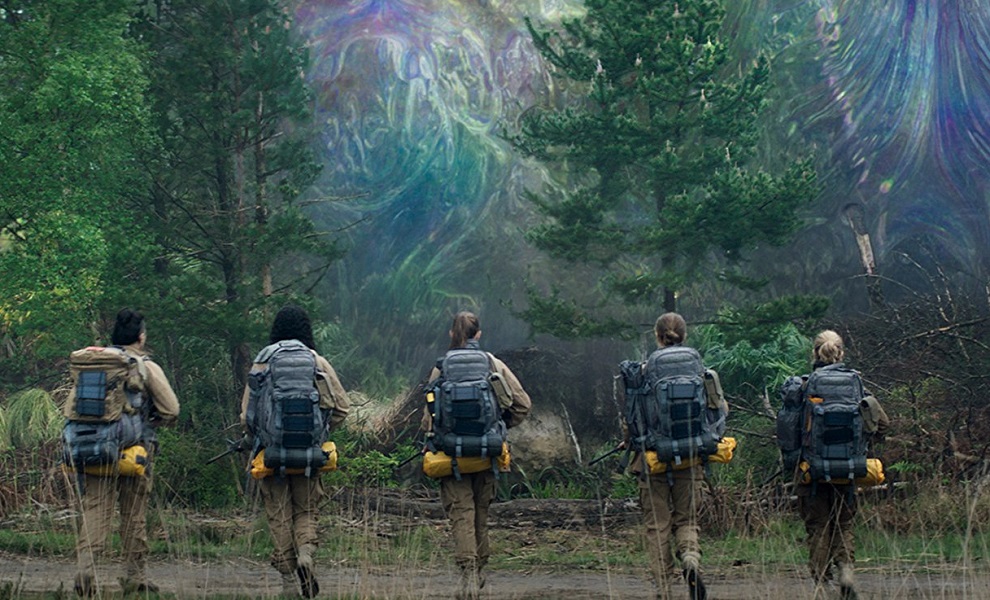 What is Annihilation Really About?

One of the main discussions surrounding this film is that Paramount opted out from international release and sold the rights to Netflix. Well, the film turns out to be a hit among critics and it remains questionable whether this approach was the right one.

On December 7, 2017, it was announced that due to the clashes between producer Scott Rudin and David Ellison (a financier at Paramount) and the shift in Paramount’s leadership, a deal was struck with Netflix handling international distribution rather than releasing the film in theaters. According to this deal, Paramount would handle the U.S. and China release, while Netflix would begin streaming the film in other territories seventeen days later, according to the trivia page about the film on IMDb.

After getting that out of the way, I have to say it doesn’t really matter. Yes, it could be seen as a really bad decision but who knows the movie could have flopped on the international box office. The good thing for sure is that Garland managed to keep his vision in the film as there were worrying signals that some of the people who provide the money thought it was too intellectual and complicated but producer Scott Rudin sided with Garland in his desire to not alter the film, defending the film and refusing to take notes. Rudin had the final cut.

I believe that there are plenty of review pieces about Annihilation already. This is why I will not go through the basic plotline, you can read it everywhere( OK, pretty simple there is this zone where laws of nature do not apply, trippy, horrific and beautiful stuff happen). 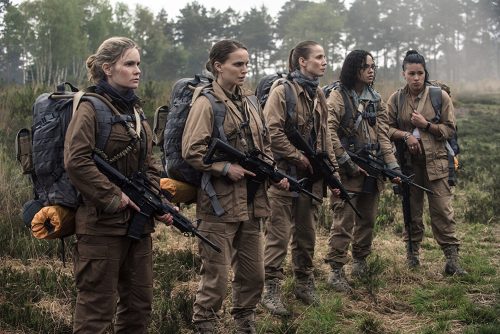 This film was based on the first book in the “Southern Reach” trilogy by Jeff VanderMeer. Garland actually read the first one and it was not recently. He decided not to reread it but merely reproduce his “dreamlike memories” and develop his own story. Some were disappointed about the bad treatment towards the book that inspired Garland, however, others praised it as a much superior piece of art. In all honesty, I hate that type of comparison between and will not delve into more details, just felt it was something worth mentioning.

The structure of Annihilation is a little shuffled and can irritate some, but it’s worth concentrating because the movie does not rely on blurring your eyes and distracting you from the plot’s holes, and uses this type of portrayal (like Arrival) to build the story to better, illustrate the themes and create a truly thrilling culmination for the characters. Nearly all the themes are brought forward through spectacular visual effects which are even more impressive when you consider the limited budget compared to some blockbusters – the overall theme being about the duality, self-destruction, division and evolution of cells. 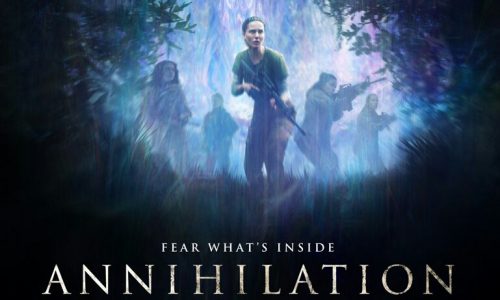 Perhaps the most crucial aspect of the movie is the theme of self-destruction. Kane (Oscar Isaac) finally killed himself after throwing himself in extremely dangerous covert missions, Lena (Natalie Portman) cheated on Kane with a man she does not even like, Josie (Tessa Thompson) had a thing about cutting her hands in order to feel excitement and so on and so on. People “cut” themselves as a progressive addiction to the endorphins that self-harm releases as surcease, however temporary, of sorrow. The snake tattoo that appears on Lena’s wrist is not there before she enters the Shimmer. It also appears on Anya’s (Gina Rodriguez) wrist and the body of the soldier killed on the wall in the building they enter. The tattoo is a symbol of a snake eating itself or Ouroboros, a symbol for the integration and assimilation of the opposite.

It is worth mentioning that the five women scientists have dealt with past/ongoing traumas that led them to volunteer for something that can be described as a suicide mission.

However, the film is not called self-destruction but annihilation. It is an alien entity that crashed on Earth (in the very beginning) and started to augment and transform reality. It is quite remarkable that self-destruction, a significat part of depression, is portrayed in such an elegant way through something outside of self, even outside our planet. One of the reasons it works so well is the indifference of that alien energy that disintegrates matter and fundamentally changes meaning. It is like a feeling where you and your surroundings melt into each other and concepts of time and space start to feel irrelevant. 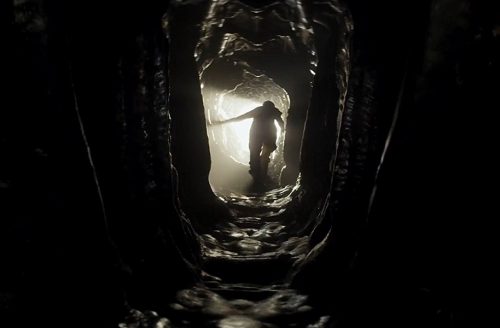 Here comes into play the truly unique and terrifying appeal of Garland’s creation. It is all based on science but not that theoretical physics, time travel and so on we are used to (concepts that are still present). It is about biology. If you think about it one the greatest sci-fi franchises Alien has that similar aspect. The physicality and how the visuals are so convincing, apart from truly gorgeous at times, make Annihilation so moving and even disturbing. The faceless creature that Lena faces after entering the abyss in the lighthouse is actually a reflection. It has a mirror-like silver surface and copies her movements. In a dramatic sequence we see that the movements are not precise, when she steps back – the creature does not do the same but moves towards her. It is startling and unnerving. She is fighting an alien and by alien, I mean both extraterrestrial and something that is outside of her but it is in a way herself because it reacts in response to her movements.

“Lena is crushed almost to death by her desire to escape this simulacra of herself. It’s not violent, it’s…what is it? Inevitable? Inexorable, too. It’s one of the finest scenes in a very fine picture, an interplay that locates the horror in the Marx Brothers’ legendary mirror gag”, masterfully put by Walter Chow in his own take of the film on Film Freak Central.

This is an astonishing culmination of the ideas presented in the film. People who have experienced depressive episodes can surely relate to that struggle that feels both inside and outside. The visual grammar serves to underline all those feelings that go through a person’s head who is suffering from depression, a condition closely connected to self-harm. The hazy and blurry scene reminds me of the Bulgarian word “мараня“(which roughly translates to visible air that flickers in dry, hot and weather without wind, one could say a mini Fata Morgana), something that is enhancing the impact and meaning of that fight. 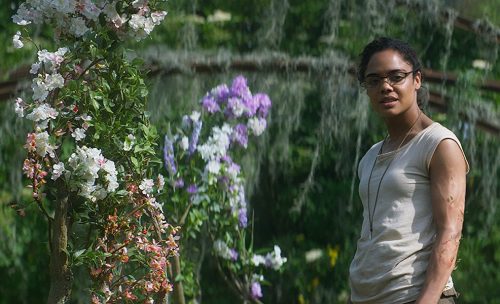 Lena is the only one that goes out of the shimmer. However, that does not mean that she is the strongest or most worthy to survive. It was purely her wish. The deaths of Anya and Cass could be perceived as accidental, as a metaphor for how some do not make it out. It does not really matter whether it is a sudden attack from a deformed monster or a slow process of self-destruction, paranoia which also affects the people surrounding the one suffering – it again ends with a brutal attack from that same deformed monster. As for Josie and Dr. Ventress, well they did not really die, they were absorbed into the alien melancholy. It was their wish just like Lena’s. Josie’s transformation is somewhat encouraging, flowers start to grow from her scars and this shows that something beautiful can grow out of that insufferable angst. The story of Dr. Ventress is quite different and darker for that matter. Earlier she says to Lena that she needed to know what was in the lighthouse, the meaning of it all. In the end, she finds out the alien is inside her and it tells her it will swallow everything, just like the tumor inside her will. It is not death but the end of hope, something that characterizes Dr. Ventress. Total annihilation.

In the final moments in the film, Lena embraces Kane, even though she knows he is a replicant. It is revealed that there’s something aglow in their eyes. There is some real significance here.

As the Shimmer started to mimic human tendencies, something that is seen throughout the film, the alien force’s ambivalent impulse to “create” and “change” has forged a new Kane and is now inside Lena. They are both not the same people who entered the Shimmer, however, it seems they will try to cope together.

Newer PostThe Medium is the Message